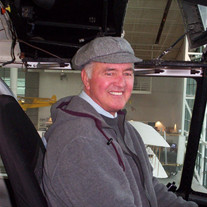 Albert Edward Feakin March 9, 1935 ~ March 21, 2018 Albert passed away peacefully on March 21, 2018, at home on Sauvies Island with family at his side. He was born in Woodland, Washington to Albert (Sonny) and Hazel Feakin. He attended school in Kalama, Washington until the family moved to Sauvies Island where he finished at Scappoose High School. He met the love of his life, Sharon JoAnne King in 1956. They were married in Stevenson, Washington on December 27, 1958. There they began their lifelong journey together of 59 beautiful years of marriage. He referred to Sharon as his “Forever and Always.” Al and Sharon’s home is on Sauvies Island where they raised their four children: Diane, Kevin, Steve and Barney. His roles in life were abundant... Al was a devoted husband, father, grandfather, great-grandfather, brother, uncle and best friend. He was a shareholder and worked at Linnton Plywood Mill until he decided to venture out on his own where he started Al’s Pumps Sales and Services. Al and Sharon ran the business together, until he retired and sold the company. Then they began their golden years of traveling and spending time with their grandchildren. He was a role model to his family. He instilled in each of them the value and significance of the meaning of family. He enjoyed camping, RVing, exploring, walking, hiking and most of all spending time with his family. In his later years when his health started to decline, reading, working in his greenhouse and gardening became his passion. Al is preceded in death by his spouse, Sharon JoAnn Feakin; parents Albert (Sonny) and Hazel Feakin; mother and father-in-law, James and Eva King; and granddaughter, Jeannie Feakin. He is survived by his daughter, Diane Feakin of Sauvies Island; sons, Kevin Feakin of St. Helens, Steve Feakin of St. Helens and Barney Feakin (Amy Ikeda) of Sauvies Island; grandchildren, Jeffrey Feakin (Melanie) of Hillsboro, Michael Feakin (Nicole) of St. Helens, Hannah Feakin of St. Helens, and Paige Treanor (Jerad) of Scappoose; five great- grandchildren; and his brother and sister-in-law, Donald and Donnajean Feakin of St. Helens. A Graveside Service will be held Friday,March 30,2018 at 1:00 p.m., at the Columbia Memorial Gardens in Scappoose, Oregon. Remembrances can be made to the Sauvies Island Fire Department, 18342 N.W. Sauvies Island Road, Portland, OR 97231.

Albert Edward Feakin March 9, 1935 ~ March 21, 2018 Albert passed away peacefully on March 21, 2018, at home on Sauvies Island with family at his side. He was born in Woodland, Washington to Albert (Sonny) and Hazel Feakin. He attended school... View Obituary & Service Information

The family of Albert E. Feakin created this Life Tributes page to make it easy to share your memories.

Send flowers to the Feakin family.