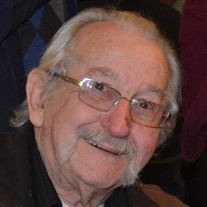 On Tuesday, July 14, 2020, Arlet Melvin Caldwell Jr., loving husband, father and grandfather, passed away at the age of 77 at his home in Scappoose, OR. Arlet was born on May 23, 1943 in Portland, OR to Arlet and Edith (Schildan) Caldwell. The second of four children; he has an older sister and a younger sister and brother. He grew up and spent the majority of his life in Portland, OR and Vancouver, WA. On January 14, 1967 he married Toni Raye Frasier. They raised two children together, son Gary and daughter Michelle. Arlet worked for TriMet, starting in April of 1970, as a diesel mechanic, retiring after over 30 years of service. He once rebuilt an engine that was one of the longest running engines in their fleet, which he was very proud of. Arlet was a proud member of the Amalgamated Transit Union Local 757 and was recently awarded with the 50-year Gold Membership, which is reserved for only an elite group of ATU members. Arlet loved singing and picking his prized guitar to any country western or 50’s rock n’ roll music. He was popular in town for singing karaoke and playing pool with his friends at the local tavern. Arlet was an avid jokester and story teller, you could always count on him for a good laugh. He enjoyed spending time with his family and dogs, camping, playing cards, and working in his yard. He always had a cup of black coffee with him and if it wasn’t coffee, it was an ice-cold Bud Light. One of his greatest passions was working on cars, trucks, and motorcycles. In his younger years, he raced his jalopy at the Jantzen Beach destruction derby and won several races. He also raced in the Old timers race several years later and placed second. He custom built a beautiful, red Harley Davidson and numerous other motorcycles and classic cars and trucks which include a 1949 Ford coupe, 1951 Ford convertible, 1953 Mercury, 1957 Chevrolet, 1971 Buick Riviera and many, many more. Arlet was preceded in death by his father, Arlet Sr., and his mother, Edith. He is survived by his wife of 53 years, Toni, his three children, Arlet, Gary (Lacey), Michelle (Wade), three grandchildren, 11 great-grandchildren, sisters Sharon and Diana, brother Jeffrey and numerous extended families. A Celebration of Life will be held on August 15, 2020 at 34625 N. Honeyman Rd. Scappoose, OR at 2 p.m.

On Tuesday, July 14, 2020, Arlet Melvin Caldwell Jr., loving husband, father and grandfather, passed away at the age of 77 at his home in Scappoose, OR. Arlet was born on May 23, 1943 in Portland, OR to Arlet and Edith (Schildan) Caldwell.... View Obituary & Service Information

The family of Arlet Melvin Caldwell Jr created this Life Tributes page to make it easy to share your memories.

Send flowers to the Caldwell family.