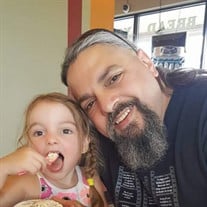 Arthur Charles Condelles of Scapoose, Oregon, formerly of Clearview, PA and West Chester, Ohio was born on May 17, 1974, in Cincinnati, Ohio. He unexpectedly passed away on October 3, 2021, at the young age of 47. Arthur was the loving father of Christian Scott Pryde and Willow River Condelles. Beloved son of Sandra Rizzo and the late George Condelles and stepson of Charles J. Rizzo. Arthur was the younger brother of Cherilyn Taber, Tracy Kelly and James Condelles and the older brother of Allison Zellhuber. Loving uncle of Shay, Lexi, Ryan, Chelsea, Brady, Tyler, Logan, and Connor. He was predeceased by his maternal grandparents Arthur and Janet Fuhrman and his aunts Bobbi J Morris, Karen Scruggs and uncle Jerry Fuhrman. He also leaves behind uncles, cousins, and many friends. Arthur attended Lakota High School, Class of 1992, in West Chester, Ohio. Although he did not graduate with his class, he later got his GED and obtained his Bachelor of Science Degree in Digital Entertainment and Game Design in 2008 from ITT Tech and was most recently employed as a Facilities Technician at Intel Corporation in Hillsboro, Oregon. In the days to follow his death, Art would want us to remember a quote from his favorite, Bob Marley: “Don’t worry about a thing, cause every little thing is gonna be alright.” Arthur felt love as deeply as he felt pain. During the past 3 years he unfortunately felt nothing but pain, shame and sadness and turned to heroin to comfort him and make the pain go away. Heroin told him, “I can make you feel accepted, I can make you feel normal, I can make you feel loved, and I can make you feel like everything will be okay.” What it didn’t tell him was that it would rob him of his children, his job, his humor, and how it would take and take and take until it eventually took his life. Our family asks that you realize no one is immune to the epidemic of opioid and heroin addiction. Memorial services will be determined at a later date and will be held in Ohio. Details will be forthcoming.

Arthur Charles Condelles of Scapoose, Oregon, formerly of Clearview, PA and West Chester, Ohio was born on May 17, 1974, in Cincinnati, Ohio. He unexpectedly passed away on October 3, 2021, at the young age of 47. Arthur was the loving father... View Obituary & Service Information

The family of Arthur Charles Condelles created this Life Tributes page to make it easy to share your memories.

Send flowers to the Condelles family.