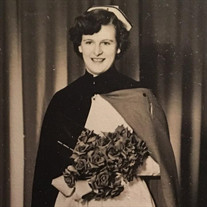 Auletta “Les” Ann Christie Oct 19, 1933 - July 20, 2018 Les Christie, age 84, of Deer Island, OR passed away on July 20th, 2018 in St. Helens, OR. Les grew up on a working farm in Ceylon Saskatchewan, born to Chester and Tilda “Tillie” Leslie. Les was preceded in death by her parents, her brothers Norval, Lornie, Russell, and Herbie and her loving husband Homer. She is survived by her Brother Alvin and Sister Eunice, sons Ty and Curt and daughter Tara. She has six granddaughters Brittany, Hannah, Talisha, Julia, Lauren and Nicole. She also has 2 great grandsons Elliot and Liam. Les went to nursing school in Regina, Saskatchewan, and received her BS in Nursing. One of her first jobs as an RN was working at a large hospital in Hollywood, California. She later moved to Sitka, Alaska where she went on a blind date, she met and married her future husband, Homer S. Christie. Les initiated the SHHS senior party, wanting to create a festive and safe place for seniors to celebrate graduation. Les implemented the girls fast pitch program at SHHS, beginning the program because her daughter loved to play softball. Growing up on a large farm in Saskatchewan Canada, Les continued to farm, while raising various birds and farm animals. Les loved to can and garden and found joy in the beauty of nature and wildlife. She was intrigued with different cultures in her travels, especially enjoying aspects of food and dance. When her kids graduated, she returned to nursing. First at St. John’s Hospital, then landing a long-term RN job at Tuality Valley Hospital in Hillsboro. Les’s love of travelling led her to China, Peru, the Caribbean, and Hawaii, to name a few. Les truly enjoyed her time with her grandchildren and the challenge of building her home after retirement. Les volunteered at the local senior center, and led an active spiritual life, participating as a Deacon at First Presbyterian Church in St. Helens OR. Les Christie’s funeral will be Saturday, August 11th at 11am at First Presbyterian Church in St. Helens OR. This will be immediately followed by her burial at Columbia Memorial gardens in Scappoose, OR. Following the burial there will be a “celebration of life” at her home on Tide Creek Road in Deer Island, OR. Donations in memory of Les can be provided to the First Plymouth Presbyterian Church of St. Helens, OR.

The family of Auletta A. Christie created this Life Tributes page to make it easy to share your memories.

Send flowers to the Christie family.