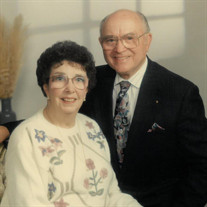 Barbara Ann Olsen died February 28, 2020 at Spring Meadows Assisted Living in St. Helens, Oregon where she had been living for the last 8 years. She was born into the Neer family on September 26, 1924 in Goble, Oregon but was raised by her stepfather as part of the Heimuller family of Scappoose. She attended high school in St. Helens. As a member of the Church of Jesus Christ of Latter Day Saints, she attended church in St. Helens. It was there that she first met Cedric who had just moved to this area from Vernal, Utah. Because Cedric was entering the World War II military, they decided to marry before he left for active duty. The marriage was performed in the Salt Lake Temple of their church on November 18, 1942. They were reunited after Cedric was stationed in Florida. Upon Cedric’s discharge, they moved back to this area where they set residence in Warren for the remainder of their lives. Initially, Barbara stayed home to raise her two sons. As the boys got older, she began working as a bookkeeper/secretary for St. Helens Ice and Beverage Company. Eventually she left the company and entered into the business of selling real estate with Gus Tusten Realty. Barbara was an active member of her church until she could no longer attend due to medical disabilities. However, her primary interest was always her family. She loved family gatherings on holidays and birthdays, or when they all went camping, hunting, fishing or vacationing. During the last few years of her life, Barbara was saddened by the loss of her husband. She would often sit in her chair and look at his picture before breaking into tears. She will now experience the joy and happiness of being reunited with him. Barbara was preceded in death by her husband of 74 years, Cedric L. Olsen. She is survived by 2 sons, Harold and wife Donna and Brad and wife Linda. Her 3 grandchildren Kimberley (Dale) George, Erik (Robin) Olsen and Danna Olsen. She is also survived by 6 great grandchildren, her sister Norma Carr and 2 nieces. Graveside services were held at Columbia Memorial Gardens where she was interred next to her beloved husband on March 5, 2020.

Barbara Ann Olsen died February 28, 2020 at Spring Meadows Assisted Living in St. Helens, Oregon where she had been living for the last 8 years. She was born into the Neer family on September 26, 1924 in Goble, Oregon but was raised by her... View Obituary & Service Information

The family of Barbara Ann Olsen created this Life Tributes page to make it easy to share your memories.

Send flowers to the Olsen family.