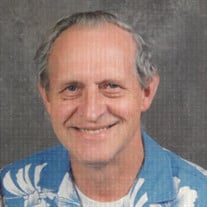 Benjamin Lee Moorhead passed away late Friday night, December 14, 2018 at his home. Ben was born in Port Angeles, Washington, to Madeline and Abraham but grew up in St. Helens, Oregon. His mother felt that the name Benjamin was too grown up for a little baby, so the family called him Lee. It wasn’t until he was 13 years old that he discovered his actual name was Benjamin Lee. The family lived on 40 acres on the west side of town. Ben helped his father clear some land, making grazing for their two dairy cows. This is also where Ben’s sister Barbara and brother Harold were born. The property remained in the Moorhead family until 2001. Ben graduated from Condon High School in June 1953. In October of that year he joined the U.S. Navy working as an automotive mechanic, only to leave four years later to transfer to the U.S. Air Force where he was a fuel system specialist. Eventually, Ben was transferred to RAF Chelveston Air Base near Wellingborough, England. While there Ben met and married an English beauty, Valerie Taylor. Margaret, their daughter, was born shortly thereafter. Another transfer brought the family stateside to Ft. Louis, Tacoma, Washington for a six year tour. This is where Richard, their son, was born. In the typical fashion of a military family, they moved around a great deal. They lived in Neah Bay, Tacoma, Edwards AFB, then back to England and RAF Greenham Common where Ben retired from the military with 22 years of service. Ben and his family returned back to his childhood home in St. Helens. Ben worked some odd jobs, but settled into a position with the local school district, making deliveries and then working as a night custodian at SHHS for the last twelve years of his career. In July 1992, a heart attach and subsequent triple bypass forced his retirement. Ben spent his retirement puttering in the garden, playing pinochle on rainy days and frisbee golf on the sunny ones. Rightly so, he was more likely to win a trick than a game of frisbee. Ben also enjoyed Bar-B-Queing with his family, listening to books on tape, and watching a never ending roster of BBC programs. Ben was an amazing husband and father, encouraging his children to follow their dreams and getting out of Val’s way as she set about redecorating the house time and again, but the garden belonged to Ben. ‘Oh…Kay’ was his usual response to whatever was offered. He enjoyed staying home, and generally driving Val crazy. Ben was kind, thoughtful, and loved being surrounded by family and friends. Ben had a great sense of humor, once planting a smiley face of daffodils in the front yard. Ben was always happy to be part of any group. New Years day 2016 Ben lost Valerie after a long, hard battle with dementia. They had 24/7 caregivers coming to the house and after she passed, the caregiving continued. Ben was slowing down and needed both company and assistance. He liked nothing better than when his ‘ladies’ were around. They were a Godsend. The family thanks each and every one of them for their loving care of Dad and Mum. Ben is survived by his loving family: daughter Margaret, son Richard and grandchildren Elizabeth, Thomas and Hannah. A funeral will be held Thursday, December 20, 2018 at 4pm at Columbia Funeral Home 681 Columbia Blvd in St. Helens. The family requests donations be sent instead of flowers to meals on wheels/ Columbia Pacific Food Bank.

Benjamin Lee Moorhead passed away late Friday night, December 14, 2018 at his home. Ben was born in Port Angeles, Washington, to Madeline and Abraham but grew up in St. Helens, Oregon. His mother felt that the name Benjamin was too grown up... View Obituary & Service Information

The family of Benjamin Lee Moorhead created this Life Tributes page to make it easy to share your memories.

Send flowers to the Moorhead family.