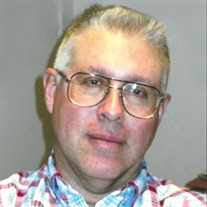 We celebrate the life of Bernard Warren Overstreet. “Bernie” was a talented and generous, yet quiet and unassuming man. He was a faithful and loving husband, a proud and dedicated father and grandfather, and a modest and stalwart servant of God. Bernie passed away on March 30, 2022, at Solomia Home Care in Saint Helens, Oregon, while his family kept vigil. He was 79. Bernie was born on August 29, 1942, in Portland, Oregon to Bernard “Curly” and Mary (Harrison) Overstreet. He was a lifelong resident of Columbia County having lived in both Warren and Saint Helens and was a graduate of Scappoose High School in 1961. He went on to attend OTI in Klamath Falls, where he studied the field of polytechnics. In 1967, he married Patricia Blind and they later welcomed two children into their family. Bernie held several jobs during his lifetime. His first as an asparagus picker in high school and his last as an Industrial Engineer at Dyno Nobel, but many in the community remember him best as a TV repair man who made house calls. Bernie was always interested in electronics and photography and was usually in the first wave of people to embrace and master new technology as it emerged. He enjoyed vacationing at the Oregon Coast with his wife, Pat, and was notorious for his insatiable sweet tooth, with ice cream being his favorite treat. Bernie was a good friend and neighbor, always willing to lend a helping hand. He was very involved in his church, devoting himself to lending his skills as a handyman or photographer to show his love to those in the congregation at Calvary Lutheran Church. Bernie is survived by Patricia Overstreet, his wife of 54 years; along with his daughter, Leah, and husband, Scott Williams; grandson, Sean, and fiancé, Ashley Stanley; granddaughter, Victoria, and fiancé, Grant Dandeneau. He has been reunited in Heaven with son, James “Jim” Overstreet; his sister, Shirley Overstreet; his parents; and many other beloved family members and friends. A memorial service will be held at 11:00am on Saturday, April 23, at Calvary Lutheran Church: 58251 South Division Road, Saint Helens, Oregon. A reception in the Fellowship Hall will immediately follow the service. A private interment will be held at Columbia Memorial Gardens in Scappoose, Oregon. Arrangements by Columbia Funeral Home. In lieu of flowers, the family asks that donations be made in Bernie’s name to Solomia Home Care (formerly known as Thanksgiving House) or Calvary Lutheran Church.

We celebrate the life of Bernard Warren Overstreet. &#8220;Bernie&#8221; was a talented and generous, yet quiet and unassuming man. He was a faithful and loving husband, a proud and dedicated father and grandfather, and a modest and stalwart... View Obituary & Service Information

The family of Bernard Warren Overstreet created this Life Tributes page to make it easy to share your memories.

We celebrate the life of Bernard Warren Overstreet. “Bernie”...

Send flowers to the Overstreet family.