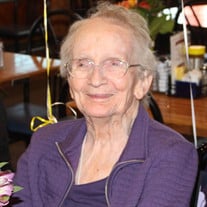 Bertha Mary Waine Sherlock, 95, passed away on January 18, 2021 in Portland, OR due to heart disease. Bertha was born on February 16, 1925 in Hanna, Alberta. She was the second of four children of Louis and Valletta (Wagner) Waine. She grew up in Prince Albert, Saskatchewan and trained as a nurse at Holy Cross School of Nursing in Calgary, Alberta. In December, 1946, she graduated and moved to St. Helens, OR to join her parents who had immigrated to the USA earlier in the year. She found work as a nurse at the old St. Helens hospital. Bertha married Willard Robert "Bob" Sherlock on January 27, 1948. They raised their family in St. Helens, surrounded by grandparents, aunts, uncles, and cousins. Vacations were often spent in Seaside, OR. In her younger days, Bertha and her parents rode the train to the coast. As the extended family grew, the Waine siblings would rent a row of cabins to enjoy time at the coast together. Bob and Bertha eventually purchased a beach house of their own, and it became the site of many wonderful family memories. The Sherlock brothers also purchased beach homes and took turns hosting family dinners when they were all in town. Bertha was a loving and devoted daughter, sister, wife, mother, aunt, grandmother, and great-grandmother. Her surviving family members have shared many fond memories of time spent with her. She helped her sons deliver newspapers when they were under the weather. She was known to keep a crystal dish of candy in her living room as “energy food” for her grandchildren. Even though she wasn’t a horror film fan, she watched a scary movie with her grandchildren, just to spend time with them. Her family raved over her “Grandma” bacon and roast beef dinners. Bertha was active in her community, volunteering at St. Frederic's Church and school, singing in the choir, serving as an election worker, and delivering Meals on Wheels. Throughout her years, she continued her role as a nurse in an unofficial capacity, administering injectable medications to, and checking in on neighbors and tending to her children's scrapes and ailments. Her husband was an active Elks club member, and they both enjoyed social outings at the club. She took the oath to become a U.S. citizen on May 28, 1964 and always remembered it as one of her happiest days. Bertha was clever and witty, always ready with a quip. "I'm in pretty good shape for the shape I'm in," she'd reply to queries of her general well-being. She enjoyed dressing up to celebrate life - no special occasion needed. The guests at her 89th birthday party were particularly delighted when she entered the Village Inn restaurant wearing a "deviled egg" costume, complete with forked tail. An avid puzzle solver, she did daily crosswords and faithfully tuned in to Jeopardy and Wheel of Fortune. At family gatherings, Bertha and her siblings could often be found bidding and bickering around the pinochle table. Bertha was preceded in death by her husband (Bob), siblings (Vera, Pat, Bobby), and twin daughters (Mary, Linda). She is survived by her children Richard (Dianne) Sherlock, Robert Sherlock (Susan Patrick), Ann (Bob) Wunsch, Joan (Dwight) Schwappe; grandchildren (Renee, Vanessa, Clay, Adrienne, Michelle, John, Sarah, Josiah); great-grandchildren (Carys, Gabrielle, Conlan, Hannah, Emma, Ella, Max, Miles, Peter, Henry); great-great grandchild (Kallen); cousin Arthur Wagner; and dozens of nieces and nephews. A private family interment will be held. Inquiries and comments may be directed to Columbia Funeral Home. Memorial donations may be made to Columbia County Meals on Wheels.

Bertha Mary Waine Sherlock, 95, passed away on January 18, 2021 in Portland, OR due to heart disease. Bertha was born on February 16, 1925 in Hanna, Alberta. She was the second of four children of Louis and Valletta (Wagner) Waine. She grew... View Obituary & Service Information

The family of Bertha Mary Sherlock created this Life Tributes page to make it easy to share your memories.

Send flowers to the Sherlock family.