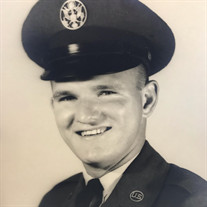 Billy Joe Asher, retired Air Force Chief Master Sgt., Air Commando Elite Special Ops, Vietnam and Dominican Republic veteran passed away Nov. 21, 2018. He was assigned to the 319th Air Commando Squadron stationed at Hurlburt AFB, Florida. He had flown on all the plane cargos in his enlisted time and was considered to be an expert. His genial personality and teaching ability were officially recognized when he was assigned to train the 143rd Air Commando group. He was named Outstanding Senior Airman of the Year for the 62nd Military Airlift Wing at McChord AFB. He was selected for rising from a three skill level to level nine in five months – an almost unheard of rate of progression as well as numerous recommendations and suggestions that had saved the Air Force thousands of dollars and numerous manhours. He was well liked and respected by everyone he worked with. He was 83 years old and is survived by his two children; Billy and Lori Asher; eight grandchildren Jennie Lee, Jesse, Jacob, Jewel, Janelle, Jedi, Jonah and Jackie Blue; and seven grandchildren Arianna, Emily, Brice, Dakota, Zane, Lily, and Jaxx. He was preceded in death by his wife Mary Elizabeth Asher. They were married for 52 years until she passed away after a lengthy battle with ovarian cancer on May 14, 2010. Bill met Mary in the summer of 1958 at Salmon Berry Lake when Mary insulted Bills dog saying it was ugly. This squabble and love affair lasted 52 years. It was a marriage destined to last despite the fact they met in June and were married two months later in August. Billy was born in Westville, Oklahoma and moved to St. Helens, Oregon as a young child with his mother Edith Smith and his sister Betty. He graduated from St. Helens High School in 1953 and was on the basketball team. He also attended Oregon Technical Institute in Klamath Falls. His wife Mary was the daughter of Jacob and Virgie Werings of St. Helens. He enlisted in the Air Force at the age of 18 which became a 26-year Air Force military career with multiple trainings and excursions. He received 41 certificates and awards of recognition for his military service. He received numerous medals and 17 ribbons, including the U.S. Airforce Commendations Medal with the Military Airlift Command at Shepard AFB in Texas for meritorious service as an aircraft load master training supervisor at the USAF Special Air Warfare Center at Herlburt Field, Florida. He served a tour of duty in Southeast Asia as a training supervisor and conducted an AC-47 Skytrain training program in the Dominican Republic during the crisis there. He did multiple tours to Vietnam delivering supplies and bringing his brothers back. He was assigned to the 273rd Instructor Squadron at the world’s largest technical school system to train personnel for air Force duty. After he retired from a 26-year Air Force military career, he went to work for Grinnell Corporation in Portland, Oregon as both a warehouse and shop manager. His passions included keeping fit and working out. He also worked at Pacific Athletic Club in Columbia City. He loved planting trees and spending time in the woods. He loved music and dancing. He had an extensive music collection that he would take his favorite songs and transfer to personalized reel to reel. He loved taking his friends and family out to dinner and sharing meals with them. He was passionate about traveling and was always planning his next trip. He enjoyed fishing and sports. He especially loved his dogs and cats, bucking hay and cutting wood. He raised 22 head of cattle and even tamed one of the bulls. He taught all his children and grandchildren through example the value of honest hard work. He was also a member of the Elks Lodge. He is loved and missed by many. He was bigger than life, tougher than nails and had an unusual sense of humor. He will be remembered as being tough, tenacious, upbeat, cheerful, social, loyal, true to his word, gregarious with a warped sense of humor. He always had a witty and quick comeback. Services will be held at the Yankton Church on Dec. 10, 2018 at 1 p.m. followed by full military honors by 627 FSS (Force Support Squadron) at McChord Field at 2 p.m. at the Yankton Church. There will be Honor Guard flag fold, taps, and fire rounds. Lastly, a Thanksgiving meal and gathering will be held in the church for all his family and friends. Bill directed his family to follow his wishes through feeding his family and friends one last time. Bill requested that any donations in his name go to St. Jude’s and any flowers can be sent to Columbia Funeral Home in St. Helens.

The family of Billy Joe Asher created this Life Tributes page to make it easy to share your memories.

Send flowers to the Asher family.