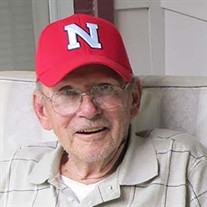 Billy Stierwalt of Scappoose, Oregon passed away April 5, 2019, in Nevada. He was 89. Billy was born in Hubbell, Nebraska to W.A. and Vera Stierwalt. He graduated from Chester High School and then became a lineman for the Burlington Northern Railroad (BNSF). In 1949 he was drafted for the Korean War in the Marine Corps where he was a lineman/wireman. He was awarded the Combat “V” commendation for heroic action serving as a wireman who continuously and fearlessly repaired broken wires served by enemy mortar and artillery fire attacks. After the war, he returned to BNSF and on September 21, 1955, he married Lois Root. They had a daughter, Theresa (Drak) in 1957 and a son, Gerald in 1960. In 1965 he moved his family to Scappoose, Oregon where he worked as a lineman for Rose Valley Telephone Company. While living in Scappoose he was also a Scappoose Volunteer Fire Fighter and worked at Multnomah Plywood Company and Mac’s Garbage Service. He worked until 1991 when he suffered a stroke. From then, he was cared for in his home in Warren by his wife, daughter, plus multiple family members who provided respite, support and companionship. In 2017 he moved to the Friendship House, adult foster home, where he made new friends and got to visit old ones. In 2018 he moved to Nevada State Veterans Home where he spent his remaining days enjoying the Nevada sunshine. Billy is survived by his daughter, Theresa Drak (Jonny); daughter-in-law, Terri Slocum Stierwalt; granddaughter, Chelsea Tull (Jeremy); grandson, Wesley Scott Stierwalt; and great-grandchildren, Maddison, Seth, Lance, Shane, Kloe, Adam, Cameron and Austin. He was preceded in death by his mother; sisters; father; son, Gerald Stierwalt; wife, Lois Stierwalt (Root) and grandson, Duffy Younts. A funeral service in Oregon will be announced at a later time.

Billy Stierwalt of Scappoose, Oregon passed away April 5, 2019, in Nevada. He was 89. Billy was born in Hubbell, Nebraska to W.A. and Vera Stierwalt. He graduated from Chester High School and then became a lineman for the Burlington Northern... View Obituary & Service Information

The family of Billy Alvin Stierwalt created this Life Tributes page to make it easy to share your memories.

Send flowers to the Stierwalt family.