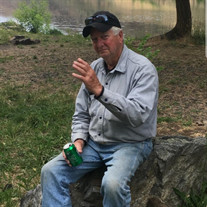 Billy Merkinson Stripling, 79, died on October 23rd 2020, at his home in Westport Oregon surrounded by his family after a 7 month battle with colon cancer. Billy is survived by his wife of 58 years Linda Anne Stripling, his son Broc Stripling and wife Tracy of Junction City, Oregon, his daughter Kelly and husband Aaron Butler of Rancho Santa Margarita, California, son Michael Stripling and wife Kacy of Westport, Oregon, and son Stephen Stripling and wife Carrie of Rainer, Oregon. He is also survived by 7 grandchildren, 2 great grandchildren and another great grandchild due in April. He is predeceased by his sister Angela Pope, his mother Thollie Mae Pope and stepfather Woodrow Pope. Billy was born in Bainbridge, Georgia on February 20th, 1941. He attended elementary school and high school in Bainbridge. After graduation he enlisted in the Airforce. While stationed in Moses Lake, Washington he met and married his wife Linda Anne Brill on February 24th, 1962. They made their home in Westport, Oregon where they have resided for over 50 years. Billy retired from Georgia Pacific after 36 years of employment on May 1st, 2005. Billy was a devoted husband, father, and grandfather. He enjoyed spending time with his boys fishing on the Snake river. He stayed busy helping his sons with projects. He also loved sitting on his front porch and visiting with friends and family. He was the epitome of a family man. He will be greatly missed by all that loved and knew him. His family takes great comfort knowing he is with our Lord and Savior Jesus Christ. A funeral service was held on October 30th, 2020 in Westport, Oregon at the Westport Community Church. Chaplin Greg Fair officiated. In lieu of flowers donations can be made to the Westport Community Church. Please sign our online guestbook at www.columbiafh.com

Billy Merkinson Stripling, 79, died on October 23rd 2020, at his home in Westport Oregon surrounded by his family after a 7 month battle with colon cancer. Billy is survived by his wife of 58 years Linda Anne Stripling, his son Broc Stripling... View Obituary & Service Information

The family of Billy Merkinson Stripling created this Life Tributes page to make it easy to share your memories.

Send flowers to the Stripling family.