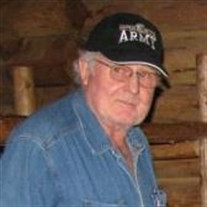 Carl Wallace Moore passed away peacefully on July 4, 2018 surrounded by his family. Carl was born in O’Donnell, Texas on January 5, 1938 to Myrtle and Roy Moore. He lived in Texas until he joined the Navy on August 22, 1956. Carl served on the USS Edmonds as a Gunner Mate 3rd Class until his discharge on August 21, 1959. Carl lived in Oregon after his discharge from the Navy but moved to Hawaii after the birth of his daughter Elizabeth. Carl moved back to Oregon and began working in the Sheet Metal industry. Carl met Marilyn when she was working at the Alibi and married her on March 4, 1972. They welcomed their daughter, Calli Jo, in 1973 making Carl a proud father of 4 girls. Carl started working at the Port of Portland in 1976 and retired in 1996 after working as a laborer for 20 years. Carl leaves behind his loving his wife of 46 years, Marilyn, daughters Elizabeth and Calli Jo, stepdaughters Joy and Julie, 5 grandchildren, Pia, Tabatha, Kajra, Justin, and Carly, 6 great-grandchildren, Cora, Zoey, Hazel, Warren, Gretchen, and George, and many other family and friends. A celebration of life will be held in the future. In lieu of flowers, please send donations to a charity of your choice. Carl was a very patriotic man and supporting the military was very dear to his heart. Carl was a very loved man and will be missed.

Carl Wallace Moore passed away peacefully on July 4, 2018 surrounded by his family. Carl was born in O&#8217;Donnell, Texas on January 5, 1938 to Myrtle and Roy Moore. He lived in Texas until he joined the Navy on August 22, 1956. Carl served... View Obituary & Service Information

The family of Carl Wallace Moore created this Life Tributes page to make it easy to share your memories.

Send flowers to the Moore family.