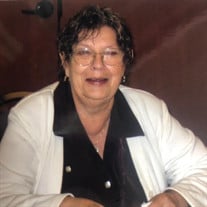 Carole Ann (Carlton) Moquin of Scappoose, Oregon was surrounded by her family when she passed away peacefully on Wednesday, May 5, 2022, at the age 83. Carole was born on September 17, 1938, in Harvey, Illinois to Woodrow and Edith Carlton. She graduated from Carl Sandberg High School in Orland, Illinois in 1955. Carole married the love of her life, Thomas Moquin, in 1959. They were married over 62 years. Together they raised 6 kids. Carole was so proud of being a mom and wife. You couldn’t strike up a conversation with her without her telling you how many kids and grandchildren she had, and how long she’d been married! Carole was a proud Air Force wife. She was stationed in many different places over the years with her husband and family including Wisconsin, Minnesota, California, Montana, Washington, Florida and Japan. Next to being a mom, wife, and grandma, Carole’s greatest accomplishment was owning Carole’s Place Restaurant in Scappoose. She was “famous” for her homemade pies, soups and Texas Burgers. Several years for the Grant Watts Auction, there was a bidding war to see who would win her “pie-of-the-month” donation. Carole was a member of St. Wenceslaus Catholic Church. She helped many years cooking countless turkeys for the Thanksgiving Day Community Meal, and her much sought-after chicken noodle soup for the Advent soup lunch. Carole was preceded in death by her dad Woodrow Carlton in 1958; her mom, Edith Carlton in 1959; sons Robert in 1965, Matthew in 2000; grandson John Holmason in 2005; brother Lee Carlton; and sister Reba Richards. Carole is survived by her husband Tom; her sons Mike and James (Jhonna); by her daughters Andrea Lloyd (Kenny), Diane Huber (Terry) and Paula Holmason (Tim); 14 grandchildren, and 14 great-grandchildren. Carole was kind, patient, loving, had a witty sense of humor and contagious laugh. She was still cracking one-liners even in her last moments. You could often find Carole in her recliner watching QVC and knitting dishcloths. She will be missed by all who had the privilege of knowing her. A viewing will be held Friday, May 20, 2022, from 3-5:00 pm at Columbia Funeral Home in St. Helens, Oregon. A funeral mass will take place on Saturday, May 21, 2022, at 11:00 a.m. at St. Wenceslaus Catholic Church in Scappoose, Oregon. There will be a reception following. In lieu of flowers, please donate to the Union Gospel Mission or the Salvation Army.

Carole Ann (Carlton) Moquin of Scappoose, Oregon was surrounded by her family when she passed away peacefully on Wednesday, May 5, 2022, at the age 83. Carole was born on September 17, 1938, in Harvey, Illinois to Woodrow and Edith Carlton.... View Obituary & Service Information

The family of Carole A. Moquin created this Life Tributes page to make it easy to share your memories.