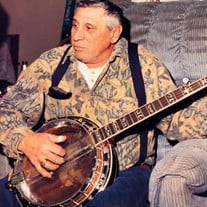 Charles J. Brien (Charlie) of Rainier, Oregon passed away at Community Home Health and Hospice on March 22, 2019 at the age of 83 with his wife Laurie and loyal companion Buddy by his side. Charles was born September 29, 1935 to Albert and Josephine Brien in Belcourt, North Dakota. He and his three brothers Lloyd, Roy and Jim were raised in the Dakota’s and grew up on the Turtle Mountain (Chippewa) Indian Reservation. Early in life things were hard and he worked many jobs to support his family, most fun was a band he started with his brothers that often went long into the night. Always a music lover, he taught himself how to play guitar as well as harmonica, piano, accordion and eventually banjo! His talent was amazing. After graduating from Fort Totten Indian School he attended a few college courses but the need to support himself and a family was most important in those days. As a young adult Charles worked at Homestake Gold Mine in Lead, South Dakota. He met his first wife Phyllis Lane and they married in 1956. In 1960 he brought his wife and daughter’s to Oregon to settle eventually in Rainier, where he remained a lifelong resident. Always a hard worker, after moving to Oregon he eventually landed a job with Weyerhaeuser in Longview, Washington as a log scaler. He and Phyllis were married for 22 years. After living on his own for a while he met Laura M. Jordan (Laurie) in 1982 and they married in 1987. In April of 1998 Charles retired after 30 years with Weyerhaeuser. Charles owned many horses, cats and dogs over the years. His beloved dogs went everywhere with him except hunting. He loved being in the great outdoors, hunting is what he lived for and his favorite was his annual elk hunting trip, horse packing into the Selway Bitterroot Wilderness of Idaho. He taught his stepson Rob to hunt and fish and together they hunted and fished the Great Northwest. Along with his amazing music abilities, his hunting prowess, he was a very skilled artist. He made everything from porcupine quill jewelry to chainsaw sculptures. His work can still be found in homes around the Rainier area. He leaves behind his wife of 32 years Laurie Brien, his stepdaughter SueAnn Hardesty Gonis and husband Andy Gonis, daughter Charlotte Brien Jones and husband Mark Jones, daughter Monica Brien Binns and husband Will Binns and a stepson Robert E. Green Jr.. His previous wife of 22 years, Phyllis Lane Brien, 6 grandchildren and 6 great-grandchildren, many nieces, nephews, cousins and close friends. He was preceded in death by his parents Albert and Josephine Brien and his brothers Lloyd, Roy and Jim. A memorial service will be held September 14, 2019 at 1:00 PM at Columbia Funeral Home in St. Helens, Oregon.

Charles J. Brien (Charlie) of Rainier, Oregon passed away at Community Home Health and Hospice on March 22, 2019 at the age of 83 with his wife Laurie and loyal companion Buddy by his side. Charles was born September 29, 1935 to Albert and... View Obituary & Service Information

The family of Charles Joseph Brien created this Life Tributes page to make it easy to share your memories.

Charles J. Brien (Charlie) of Rainier, Oregon passed away at...

Send flowers to the Brien family.