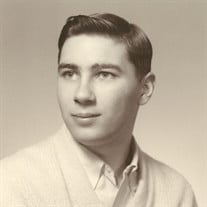 Charles Richard Stotts January 14, 1949 ~ February 18, 2018 Charles Richard Stotts, 69, passed away peacefully on February 18, 2018. He was born in Schenectady, New York, on January 14, 1949, to Charles Donald and Veronica Louise Stotts. He lived in Portland, Oregon, graduating from David Douglas High School in 1967. In June of 1968, he began his service in the Army in Vietnam. He was honorably discharged in June of 1970. He worked for many years for his parents’ company, Nylon Wholesale, Inc. When the company and his family relocated to Scappoose in 1972, he decided to join them. He loved living in the small town of Scappoose, and watched it change and grow over the next several decades. He later enjoyed working part-time at the Roadrunner in Scappoose, where he met many friends. He was a member of St. Wenceslaus Catholic Church. Charles, who many called Richard, loved his three nieces and nephew, insisting that they call him "Uncle Charlie," except on Christmas Eve, when he dressed as Santa Claus and surprised the Stotts kids with gifts! Charles was kind and loving to everyone he knew. Charles is survived by his mother, Veronica Louise Stotts; his brother and sister-in-law, George and Peggy Stotts; his sister-in-law, Katrina Stotts; his nieces, Veronica Sullivan (Jason), Angela Stotts (Beau), and Kaarina Stotts; his nephew, David Stotts; and his great-nephews, Aarin Hoygaard and Henry Sullivan. In Heaven, he joins his father, Charles Donald Stotts, and his brother, Arthur Stotts, where they are enjoying fine food, great laughter, and a lot of love. There will be a Celebration of Life for family and friends at a later date.

The family of Charles Richard Stotts created this Life Tributes page to make it easy to share your memories.

Send flowers to the Stotts family.