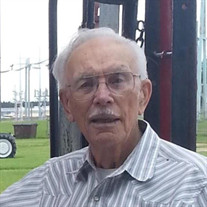 Clarence E. Nickel went home to be with the Lord on August 20, 2021, at the age of 104 (and a half). Clarence was born January 26, 1917 in Willow Creek, North Dakota to August and Ella Nickel. As a child, he loved helping his grandfather and looked forward to the special mints that his grandmother had hidden in her apron. He completed the 8th grade, worked as a hired-hand, and eventually started farming his own land. Clarence met his wife, Verona Niewoehner, while working as a hired-hand on her family’s farm. After becoming engaged, Clarence was drafted into the Army where within two years he worked his way up to Staff Sergeant. He was Honorably discharged due to health issues. On June 18, 1944, Clarence and Verona were married in Pasadena, California while they were working for McDonnell Douglas building aircraft for the war. They moved back to North Dakota once WWII ended where they farmed and built a diner, the Blue Diamond. Clarence and Verona adopted four children, David, Bonnie, Jody, and Teresa before moving to Oregon in 1965. Much to Clarence’s surprise, in 1967, a fifth child, Heidi, was adopted, completing their family. Clarence owned a share at Linton Plywood where he worked until his retirement. Upon retirement, he and Verona enjoyed traveling in their fifth-wheel. Everywhere they went, Clarence managed to find someone to talk to. There were never any strangers, just friends he hadn’t yet met. Clarence was a founding member of Calvary Lutheran Church in St Helens. He helped build the existing church where he was a beloved member. If something needed to be fixed or built, Clarence was the first to offer to take care of it. He could fix anything, a trait he picked up from his grandfather. Clarence enjoyed spending time with his family. He was especially delighted to spend time with his grandchildren and great-grandchildren. It was not unusual to find him chasing the children through the house with messed up hair and a cackle in his voice, only to catch them, tickle, and squeeze them until everyone was breathless. Clarence’s sweet-tooth was beneficial for the grandchildren too, as he always had black licorice and cookies to enjoy with his evening cup of coffee. Clarence is survived by his children: David Nickel (Linda), Teresa Zuniga (Daniel), and Heidi Ralls (Corey); his grandchildren: Christie Pierson (Tim), Jennifer Shimmin (Daniel), K’lyn Nickel, Cody Nickel (Tiffany), Stephanie Gordon (Ken), Melissa Beavers (Andrew), Jessica Hernandez (Eduardo), and Eldon Ralls; nine great grandchildren, his sister, Leona Moe, and numerous nieces and nephews. Clarence is predeceased by his wife, Verona, daughter Bonnie, and son Jody; sisters Adeline, Lenora, and Margaret, and his brother Albert. A graveside service will be held on Thursday, August 26, 2021, at 11:00 a.m., at Columbia Memorial Gardens in Warren, Oregon, followed by a brief time of fellowship at Calvary Lutheran Church in St Helens. Funeral services are provided by Columbia Funeral Home of St Helens, Oregon. Donations may be made to a charity of your choice on behalf of Clarence Nickel.

Clarence E. Nickel went home to be with the Lord on August 20, 2021, at the age of 104 (and a half). Clarence was born January 26, 1917 in Willow Creek, North Dakota to August and Ella Nickel. As a child, he loved helping his grandfather and... View Obituary & Service Information

The family of Clarence Edward Nickel created this Life Tributes page to make it easy to share your memories.

Clarence E. Nickel went home to be with the Lord on August 20,...

Send flowers to the Nickel family.