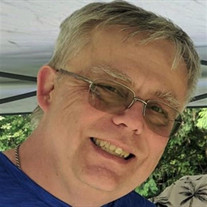 Curtis Napier Cole Jr. passed away on May 28, 2019, at OHSU hospital in Portland, Oregon after a short & aggressive battle with cancer, just a few days shy of his 60th Birthday. Born June 1, 1959 in Portland, Oregon to Beverly Duncan & Curtis Cole Sr., Curtis, known as “Nap” by close friends and family, was raised mostly in St. Helens, Oregon, & graduated with the class of 1978, from St. Helens Sr. High School. Beloved father, fun grandpa, thoughtful neighbor, loving partner, kind friend, generous brother and caring son, Curt touched the lives of many people. Making memories at the beach was among his favorite past times and he enjoyed taking his kids and grandbabies there. He also enjoyed road trips, working on cars, good music, supporting charities & spending time with his family. He had a love for all people, young and old, and did his best to teach his children about love, kindness, respect and manners. Those same attributes were shared with their closest friends, whom were always treated like family. One of his greatest joys was being with his three grandbabies. Curtis raised his two children in St. Helens before moving to Milwaukie in 2007. Proceeding him in death were his parents, Beverly & Stanley Duncan of St. Helens and Curtis & Ethel Cole of Portland, a brother, Don & sister, Kathy. Curtis is survived by his children, Sarah & Jeremy Lockwood, and their three children, Chloe, Soren and Marley, of Independence, OR and Tony Cole of St. Helens, OR. He is also survived by his brothers, Rob, Mike, Jeff, Dave, David, Dale, Ralph, & Cliff, and sisters, Cheryl, Sheila, Elicia, Debbie, Susan, Myong & Eva, along with many nieces and nephews. A hard working and dedicated man, Curt spent a great 35 years, mostly in the Anodizing Lab, at Hydro in Portland, Oregon. Services for Curtis will be held at Yankton Community Fellowship, 11:00am, on Saturday, June 8, 2019., 33579 Pittsburg Road., with burial immediately after at the Hillcrest Yankton Cemetery. In lieu of flowers, a donation to the Human Rights Campaign in Curt’s name, would be a thoughtful remembrance for such a wonderful man.

Curtis Napier Cole Jr. passed away on May 28, 2019, at OHSU hospital in Portland, Oregon after a short & aggressive battle with cancer, just a few days shy of his 60th Birthday. Born June 1, 1959 in Portland, Oregon to Beverly Duncan & Curtis... View Obituary & Service Information

The family of Curtis Napier Cole Jr. created this Life Tributes page to make it easy to share your memories.

Send flowers to the Cole family.