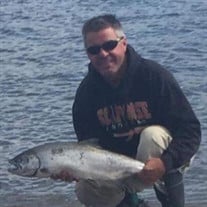 Faith | Family | Fellow Man | Fisherman “He fought the good fight, He finished the race, He kept the faith.” II Timothy 4:7 Curtiss Lee Buster, age 59, of Scappoose, Oregon, peacefully joined the Lord on October 5, 2021, following a long and brave battle with cancer. Curtiss was born on May 25, 1962, in Great Falls, Montana, to Curtiss and Bobbie Buster, who later settled in The Dalles, Oregon, and had three more children. Curtiss graduated from Wahtonka High School in 1980, then attended Mt. Hood Community College and graduated as a Certified Welder. Always a hard worker, Curtiss enjoyed working side by side with his dad for many years, in both Alaska and Oregon. Curtiss loved his faith and his hobbies were fishing, hunting, and fixing up trucks. He also had a creative side that came out in the form of welding home décor, family signs and items that were a reflection of his faith. He and his daughter, Jordan, spent many Christmas seasons welding special gifts for family, like nativity scenes or angels made of metal and welded together by the two of them with love and a lot of fun. Curtiss had a great sense of humor, including many inside jokes with friends and family (including a very funny aversion he has to walnuts). He lived each step of his life in faith and truly enjoyed serving others in his community, from building a useful storage rack at the bagel shop to repairing a random pothole, sharing his fresh-caught steelhead or anonymously mowing a neighbor’s back lot. Curtiss was preceded in death by his son Matthew Levi Buster in 1996 and his brother Christon Robert Buster in 2020. He is survived by his beloved daughter Jordan Buster; loving girlfriend Gina Roberts; parents Curtiss and Bobbie Buster; sisters Jody Buster and Cindy Burow; nephews and nieces Tyson, Devan, Kylie, Donovan, Charlie, Chelsey, Dianne, Bruce; great niece Annabelle; and his furry and faithful dog, Coco. Ever faithful to the Lord, he was very much at peace with God’s plan for him. He will be missed dearly, but is now in heaven, holding his son and swapping stories of fishing, hunting and fixing up trucks with his brother. “Well done thy good and faithful servant.” Matthew 25:21 The family will celebrate his life privately, as he wished.

The family of Curtiss Lee Buster created this Life Tributes page to make it easy to share your memories.

Send flowers to the Buster family.