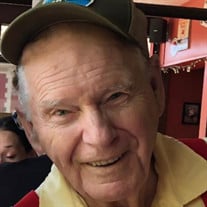 Dale Franklin Heaton June 19, 1934 – June 19, 2020 Dale Heaton passed away on June 19th, the morning of his 86th birthday, at home surrounded by his family. Dale was born in 1934 to Wayne and Alice Heaton. He grew up in his beloved hometown of Bates, Oregon, with his four brothers and sisters, spending his days raising heck with his lifelong best friends, Dave Connolly, Gene Larkin, and Denny Cook. In 1952, Dale graduated from Prairie City High School and joined the Air Force. His military service took him to London, where he encountered a dark-haired beauty named Toni Lumley, who would accompany him back to Bates and spend the next 63 years by his side. Dale left his job at the Edward Hines Lumber Company after 11 years, and he and Toni moved from Bates to Boise in 1968 with their two children. He spent the next 30 years working in the Albertsons ice cream plant, much to his grandkids' joy. Eastern Oregon was never far from Dale's mind, however. After several years in Boise, they purchased land near Sumpter, and with the help of friends and family, Dale built the summer cabin that would be the centerpiece of favorite family memories for the next 35 years. Dale's greatest passions were photography and the kids in his life. With seven granddaughters and twelve great-grandkids, he was never short on subjects. He spent hours in the editing room, so everyone could see what it would have been like if Toni had met celebrities like Marilyn Monroe or George and Laura Bush, or if his great-grandson really had been a toddler farmer. The legacy of a nearly forgotten mill town lives on, thanks in part to the countless hours of video Dale put together honoring his hometown and the people who lived there. In 2011 Dale and Toni moved to Scappoose, Oregon, so that they could be closer to family. Dale spent the last nine years coaching all of the babies in the art of the great high-five. He was an amazing husband, father, grandfather, great-grandfather, and friend. He will be greatly missed. Dale is survived by his wife, Toni; his brothers, Wayne Heaton and John Heaton; sisters Peg (Larry) Auld, and Polly Dockweiler; kids Dave (Sandee) Heaton and Deanne (Wade) Evans; grandchildren Ami (Kirk) Halvorson, Lindsay (Neil) Elder, Chelsea (Derrick) Vargason, Jennifer (Josh) Heaton-Rounsville, Samantha Dale (Andrew) Cooper, Alyona (Phillip) Merriman, and Olya (Kyle) Evans; and his twelve great-grandchildren. A memorial service will be held at a later date. Please sign our online guestbook at www.columbiafh.com.

The family of Dale Heaton created this Life Tributes page to make it easy to share your memories.

Send flowers to the Heaton family.