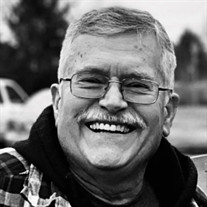 A loving husband, father and brother, Dayton Ray Thorp of Rainier, Oregon suddenly and unexpectedly passed on to God on October 21, 2021 at his home in Rainier, Oregon, at the age of 73. He was born on February 17, 1948 in Portland, Oregon to Barbara (Peters) and Chet Thorp of St Helens, Oregon. Dayton attended Saint Fredericks Catholic school, and graduated from Saint Helen‘s High School in 1967. From there he earned his associates from PCC in automotive, aviation airframe & power plant mechanic. He moved to Central Point, Oregon and started working for Erickson Aircrane, assembling and rebuilding Sikorsky Skycrane helicopters, which he loved and was great at what he did. Here he and his wife Mary McCulloch started a family and had 3 children. After his divorce Dayton moved back North to Warren, Oregon where he met the love of his life Beverly Clark, got married in 1989 and raised their children. There he took a job with the Saint Helens School District as head custodian. During retirement, and after the passing of his wife Beverly, he moved to Rainier, Oregon, to stay near all of his kids and grandkids as they were the joy of his life. Dayton had a lot of things he was interested in. He liked: snow, Christmas lights, chocolate, and antique Ford trucks. But he loved: family, going to Mount Hood with Bev, family camping, family vacations to Sunriver, Alaska cruises with Bev, watching his grandkids grow up and attending every one of their sport games, and going out of his way to help others. People in the community talk about and remember him as always being the first to help out in a time of need. He was such a thoughtful, selfless, giving person, and an amazing role model. His great smile and optimistic view of things helped others, especially during their times of distress. He was a hard worker who put others before himself and was always there to rely on even when you didn’t know. He was an amazing father and will be so very missed. Dayton was involved with St Wenceslaus Catholic Church, the Knights of Columbus, the American Truck Historical Society that he loved, the Rainier Senior Center, and was a Boy Scout troop leader when his sons were younger. Dayton was preceded in death by his wife of 22 years, Beverly, and his parents Barbara and Chet, whom he is now reunited with in heaven. Dayton is survived by his three sisters; JoAn, Sue and Mary. His three children; Jolena, Joseph and Jesse. His nine grandchildren; Hope, Trinity, Evan, Owen, Thea, Ethan, Kaylee, Wyatt and Brynlee. His new great grandchild, Leilah Heflin. As well as many cousins, nieces and nephews, and friends. He will be interred on the memorial wall at Columbia Memorial Gardens in Warren, Oregon next to his wife Beverly. A funeral service will be held Saturday, November 13, 2021 at 11am, at Saint Wenceslaus Catholic Church in Scappoose, Oregon. A reception will follow in the parish hall at 12pm. Any flowers or donations can be dropped off at Columbia Funeral Home in Saint Helens.

A loving husband, father and brother, Dayton Ray Thorp of Rainier, Oregon suddenly and unexpectedly passed on to God on October 21, 2021 at his home in Rainier, Oregon, at the age of 73. He was born on February 17, 1948 in Portland, Oregon... View Obituary & Service Information

The family of Dayton Ray Thorp created this Life Tributes page to make it easy to share your memories.

Send flowers to the Thorp family.