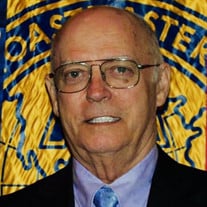 Dennis Bernhard Hills passed away on Sun., Aug. 19, 2018, surrounded by his family and friends in Portland, Oregon. Dennis was a resident of St. Helens, Oregon for the majority of his adult life. He was born on July 27, 1943 along with his fraternal twin brother Daniel, to Bernard and Margaret Hills in Portland, Oregon. Dennis was a Vietnam era veteran. He voluntarily enlisted in the United States Army in 1961 where he served as a pharmacy technician and was honorably discharged in 1964. Dennis had an extraordinarily fulfilling 25-year career with the St. Helens Fire District, now known as Columbia River Fire and Rescue. He began his career as a line firefighter and ascended to the rank of Division Chief. Dennis did not rest on his laurels after retiring; he began his own computer networking company serving many local businesses and private customers. Learning and expanding his personal horizons were a vital part of his life. In recent years his participation in Toastmasters International earned him a great many awards and accolades in public speaking. He also achieved the Distinguished Toastmaster Award (DTM) with his daughter Ronda. Dennis spent 47 years of his life as an integral part of the addiction recovery community throughout this region and beyond. Through his experience, strength and hope, he assisted countless people in their personal journey of recovery from alcoholism and drug addiction. It was the unwavering generosity of his time, effort, energy, humor and wisdom that helped so any people find a road to become productive and happy members of society. His dedication to those in need went far beyond his career as a firefighter and EMT; it reached into hospitals, institutions and jails. His life experiences gave people suffering from addiction hope and a true living example of how to live life free of the bondage of addiction. He shall always be remembered as “The Miracle Man”, as a young recovering mother and her children fondly call him. Dennis was preceded in death by his beloved wife Judy, in 2010. He is survived by his four children Richard Hills, Carmen Hills, Ronda Hills and Dennis C. Hills, as well as 16 grandchildren and 17 great-grandchildren. Dennis shall be interred with his wife at Columbia Memorial Gardens in Scappoose, Oregon. His memorial services shall be held at the Warren Community Fellowship in Warren, Oregon on Sept. 29, 2018 at 1 p.m. A reception will follow with food provided. In lieu of flowers, please make donations to the St. Helens Alano Club Founders Memorial Fund. For the friends of Bill W… Our book is meant to be suggestive only. We realize we know only a little. God will constantly disclose more to you and to us. Ask Him in your morning meditation what you can do each day for the man who is still sick. The answers will come if your own house is in order. But obviously you cannot transmit something you haven’t got. See to it that your relationship with Him is right, and great events will come to pass for you and countless others. This is the Great Fact for us. Abandon yourself to God as you understand God. Admit your faults to Him and to your fellows. Clear away the wreckage of your past. Give freely of what you find and join us. We shall be with you in the Fellowship of the Spirit and you will surely meet some of us as you trudge the Road of Happy Destiny. May God bless you and keep you—until then.

Dennis Bernhard Hills passed away on Sun., Aug. 19, 2018, surrounded by his family and friends in Portland, Oregon. Dennis was a resident of St. Helens, Oregon for the majority of his adult life. He was born on July 27, 1943 along with his fraternal... View Obituary & Service Information

The family of Dennis Bernard Hills created this Life Tributes page to make it easy to share your memories.

Send flowers to the Hills family.