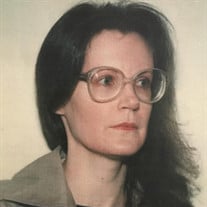 Donna Marie Snow, my sister, passed away unexpectedly on September 17, 2019. We will be forever grateful to Barbara who was holding her hand as she passed. Donna was the oldest child of Luther and Mary Snow, born November 30, 1947, in Portland, Oregon. Precocious from birth, our mother loved taking pictures of her with their new Brownie camera. We lived a typical life of the 50s and 60s involving road trips, shopping downtown, and family, neighborhood and school activities. I rode home from kindergarten on Donna’s bicycle. We went together to the opening day of the Lloyd Center in 1960 with our mother. Donna took me to my first music concert, The Beatles, in 1965. My first, and last, double-date was with Donna and her boyfriend. She “chaperoned” my first high school dance, the Sadie Hawkins. My first airplane trip was to visit Donna in San Francisco. An enigma to many, I knew her intuitively and will keep our good times forever in my heart. Donna was adventurous and lead a storied life. A Washington High School graduate, her first job was in retail sales at Meier & Frank in Portland. Following attendance at Portland Community College, she moved to San Francisco and worked at Sak’s Fifth Avenue. She married and enjoyed the bustling city life. Always compassionate to the ill and less fortunate, Donna completed her nursing education in San Francisco. Returning to Portland, due to ill health, she later worked again in retail sales. Our mother was pivotal in her return to better health. Later, moving to Alpen, Germany involved travel and experiences she had always desired. Yet, she missed America and returned to Portland. Wanderlust and independence prompted her return to California in the late 1990’s. Donna settled again in Portland following our father’s passing. She was our mother’s primary companion for several years. Survived by me, her “Lizzie” VanDaveer (Mike); nephew, James “Jamie” Hoidal; grandniece Jillian Hoidal; grandnephew Luke Hoidal; favorite cousin, Larry Pryor; cousin Darla Harrington and family; kitty Oliver, and more friends than she knew. A special, very important thank you to her long time, loyal and loving friend, Joe Sherwood. Donna is proceeded in death by our parents, former husbands George Chittum and Rainer Schittley, and several extended family members. Donna will rest next to our maternal grandfather, Robert Bethke, along with aunt Rose Pryor and cousin John Pryor, in Fairview Cemetery, Scappoose, Oregon. Remembered as a beloved daughter, sister, and friend by those her loved her very much. Please sign our online guestbook at www.columbiafh.com

Donna Marie Snow, my sister, passed away unexpectedly on September 17, 2019. We will be forever grateful to Barbara who was holding her hand as she passed. Donna was the oldest child of Luther and Mary Snow, born November 30, 1947, in Portland,... View Obituary & Service Information

The family of Donna Marie Snow created this Life Tributes page to make it easy to share your memories.

Donna Marie Snow, my sister, passed away unexpectedly on September...

Send flowers to the Snow family.