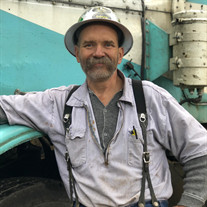 Douglas Robert Barnes, 56, died December 9th, 2018 in his home, surrounded by family, in St. Helens, OR after a battle with brain cancer. Doug was born on April 14, 1962 in Cottage Grove, OR to Robert and Irene Barnes. On August 19, 1983 he married Tamera Evans in the Salt Lake Temple for time and all eternity. He graduated from Hillsboro High School in 1980 and obtained a Bachelor of Science in Mechanical and Manufacturing Engineering from Oregon Institute of Technology in 1995. He had a successful engineering career for 12 years, after which he began living his dream and started his own logging company, Barnes and Boys Logging, in 2007. Doug was passionate about two things: his family and logging. He loved the history of railroads and towns, taking backroads, and being outdoors. Doug was an Eagle Scout and served as a scout leader for many years. He was an active member of the Church of Jesus Christ of Latter-day Saints and faithfully served within the church throughout his life. Doug is survived by his loving wife, Tamera; his parents, Robert and Irene, his brothers, Donovan and David; his children: Steven (Jessica), Nicholas (Heather), and Megan; his five grandchildren: Alaska, Porter, Talmage, Millie, and Axton. His memorial service and celebration of life will be held Saturday, December 15thin the St. Helens Church of Jesus Christ of Latter-day Saints building, at 12:30 PM. Per Doug’s request it will include a casual pizza party. Prior to the service, a viewing will be held from 10:00 to 11:30 AM. In lieu of flowers, please donate to the American Cancer Society. Please sign our online guestbook at www.columbiafh.com

The family of Douglas Robert Barnes created this Life Tributes page to make it easy to share your memories.

Send flowers to the Barnes family.