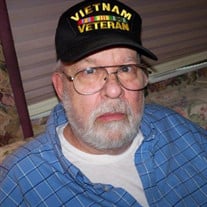 Douglas Garry Corn, 75, of Scappoose, Oregon passed away on Wednesday, January 20, 2021. Douglas was born at St. Elizabeth Hospital on September 27, 1945 in Yakima, Washington, the son of William W. Corn and Margaret (Burke) Corn of Yakima, Washington. Douglas graduated in 1964 from A.C. Davis high school in Yakima, Washington. He served in Vietnam in the Army, as a cook, from 1966 - 1968. After he was honorably discharged, he returned to Yakima and attended Perry Technical Institute, where he studied refrigeration and cooling. Shortly after completing that program he moved to Portland, Oregon. Throughout his life Doug worked in a variety of service industry type jobs. The jobs he enjoyed the most were in restaurants and truck driving. Doug lived in the Scappoose and St. Helens area for many years. In his spare time he enjoyed his friends, family and his dog. Douglas is survived by his daughters, Margaret Ann (Corn) Barker (Kirk) and Sheryl Ann Corn of Vancouver, Wa; three granddaughters and a grandson, Amanda (Barker) Rodriguez (Julio),Kimberly Barker, Taylor Wilcox and Dallas Wilcox of Vancouver, WA; siblings Donald Corn, Roberta (Corn) Blankenbaker, Carole(Corn) Driscoll of Yakima WA. Douglas also had two great grandchildren, Micah Wilcox and Madelynn Rodiguez. Douglas will be remembered with a memorial service at Willamette National Cemetery with full military honors. Please sign our online guestbook at www.columbiafh.com.

The family of Douglas Garry Corn created this Life Tributes page to make it easy to share your memories.

Douglas Garry Corn, 75, of Scappoose, Oregon passed away on Wednesday,...

Send flowers to the Corn family.