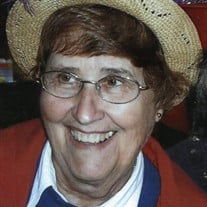 Eldine Joanne Anderson (Bozich) passed away in her home surround by family on January 27th at the age of 87. She was preceded in death by her husband Robert Anderson in November of 1972. She was born in Portland Oregon on May 12th, 1934, to John and Helen Bozich. Eldine was the youngest of 7 children and was preceded in death by brothers John, Joe, and Stanley and sisters Mary, Sylvia, and Patricia. After graduating from Lincoln High School in 1952, she attended Portland State University completing a Health and Physical Education degree. She started her career in Scappoose in 1956, teaching high school Physical Education, Drivers Education, and Typing. In 1972, she began teaching at Grant Watts Elementary until her retirement in 1994. It was not uncommon for her to have taught three generations in a single family! Eldine was dedicated to her faith and was very active with St. Wenceslaus Parish. She enjoyed teaching Sunday School, serving on the leadership council, and participating in several parish activities. Many may recall her heading up the gravy making station at the annual Thanksgiving dinner. After retiring, she was a dedicated volunteer for the Scappoose Food Bank. Passionate about sports, she spent many years pitching in league slow-pitch softball and knocking down pins in league bowling. Many friendly rivalries were had with friends involving her favorite teams - the Oregon Ducks, Notre Dame Fighting Irish, and the Portland Trail Blazers. She took that same enthusiasm to playing bingo at the Moose Lodge. In later years, this included group trips to casinos with friends and family. Eldine is survived by her family, Sherrie (Sean), Tammie, Robert (Alex, Alia, Dylan, Nathan). Services will be on February 23rd at St Wenceslaus Parish in Scappoose. Recitation of the Rosary will be at 10:30 followed by a Memorial Mass at 11:00. A luncheon reception at the parish hall will be held after mass. A Memorial Celebration of Life will be scheduled at a later date that is yet to be determined. As per Eldine’s wishes, donations to St. Vincent De Paul Scappoose Food Pantry are preferred in lieu of flowers.

Eldine Joanne Anderson (Bozich) passed away in her home surround by family on January 27th at the age of 87. She was preceded in death by her husband Robert Anderson in November of 1972. She was born in Portland Oregon on May 12th, 1934, to... View Obituary & Service Information

The family of Eldine Joanne Anderson created this Life Tributes page to make it easy to share your memories.

Eldine Joanne Anderson (Bozich) passed away in her home surround...

Send flowers to the Anderson family.