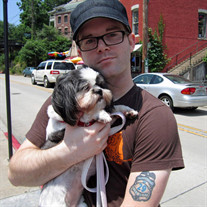 Eric James Rankin, age 37, of St. Helens, OR died on Friday January 3rd 2020 at his home. He was born on June 16th, 1982 in San Clemente California. He graduated from Simi Valley High School in 2000 and received his associate’s degree from Moorpark College in 2003. He loved working in television and public broadcasting, most recently as a Master Control Operator with Oregon Public Broadcasting since 2012. Before moving to St. Helens, OR in 2015, Eric resided in Portland, OR from 2012-2015, Tulsa, OK from 2008-2012, and before that he grew up in southern California. He met his wife Christine through his love of roller skating where he was the referee of the Angel City Roller Girls in Los Angeles, CA. He loved spending time with his family and was deeply devoted to his daughter Coraline, his wife Christine, his parents, siblings and other family members. He focused his life and love around his family, especially his daughter who he loved taking to parks, playgrounds, museums, library play group, tee-ball, swimming, dance class and exploring the world with her. He loved watching Dodgers baseball and going to Dodgers stadium when visiting California. Eric was an extremely gifted and talented musician and played the mandolin, guitar, ukulele and other instruments and was also in a band called "The Breakup Brendas" in Los Angeles, CA. He was passionate about his pets including: two dogs, one cat and two aquariums full of fish. He was awarded "most supportive dad in the dugout" from St. Helens little league. He was survived by his wife, Christine Rankin, his daughter Coraline Rankin, his mother Judy Rankin Kopitz and step-father Mark Kopitz, brother Michael Rankin, step-brother Brett Kopitz, step-sister Heather Staley and their families. There will be a celebration of life held in Eric’s honor Friday, January 10, 2020 at 11:00 am at Columbia Funeral Home in St. Helens, Oregon, with a reception to follow. In lieu of flowers donations may be made to Oregon Public Broadcasting. Please sign our online guestbook at www.columbiafh.com

Eric James Rankin, age 37, of St. Helens, OR died on Friday January 3rd 2020 at his home. He was born on June 16th, 1982 in San Clemente California. He graduated from Simi Valley High School in 2000 and received his associate&#8217;s degree... View Obituary & Service Information

The family of Eric James Rankin created this Life Tributes page to make it easy to share your memories.

Send flowers to the Rankin family.