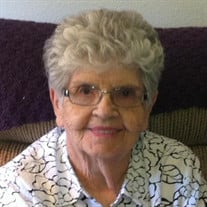 Esther Margaret Chalmers died on September 23, 2021 at the age of 95. Esther was born on January 3, 1926 in Leamington, Ontario, Canada to John and Agnes ( McPherson) Grant. In 1942 Esther met Glenn Chalmers and they married February 19, 1944. Glenn served in the Canadian Navy during World War II. They lived on the Chalmers family farm in Leamington until 1956. Their two daughters, Linda and Sandra Chalmers were born in 1948 and 1951. In 1956, Glenn fulfilled his dream of moving to California. The entire family of four piled into their 1954 Buick with all their belongings and headed toward Los Angeles where they settled. Glenn worked for Chrysler Corporation Esther worked in retail at the A&P Store and Bullocks in S. California for a number of years. In 1977-1982 they purchased a mobile home park in Phoenix, Arizona, developed it and managed it until 1982. They then retired, bought an RV, and traveled the country until 1996, settling in Santa Maria, CA in 1996. Esther loved reading, sewing, crochet, swimming, and knitting. Receiving one of her beautiful Afghans was indeed a prized gift. She also loved making clothes for her two daughters. She was a Girl Scout Leader, and had many friends, and never met a person she didn’t care for. Glenn and Esther were long time members of the Methodist Church wherever they lived. As their health problems increased, they moved to Hillsboro, OR in 2010 to be closer to their daughter who is a nurse. Esther is survived by her daughters Linda and Sandra Chalmers of Portland and Hillsboro, her Grandson David Chalmers Eckstein of Seattle, his wife, Kimberly Johnson Eckstein, and her two great granddaughters Eliotte and Nathalie Eckstein. Esther was preceded in death by her husband of 72 years, Glenn, her brother Robert Grant of Windsor, Ontario and her half-sister Alice Wurglar. Esther loved her family more than we can say and was loved so much in return. We miss her terribly. A memorial service will be held on a future date at Hillsboro Methodist Church, 168 NE 8th Ave. Hillsboro, OR 97124.

Esther Margaret Chalmers died on September 23, 2021 at the age of 95. Esther was born on January 3, 1926 in Leamington, Ontario, Canada to John and Agnes ( McPherson) Grant. In 1942 Esther met Glenn Chalmers and they married February 19, 1944.... View Obituary & Service Information

The family of Esther Margaret Chalmers created this Life Tributes page to make it easy to share your memories.

Send flowers to the Chalmers family.