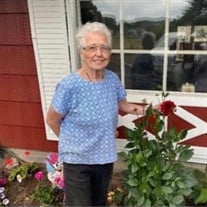 Evelyn Mares, Larsen, Baker 9/10/1930 – 8/17/2020 Evelyn lived in Scappoose for 75 years. Her strength to fight her health battles inspired all who knew her. On August 17th she lost the battle and is now at peace. Evelyn was born on September 10, 1930 in Twin Falls, Idaho. Her family moved to St. Helens, Oregon when she was 7. She attended school in St. Helens. She met and married Frank Mares in October 1946. They were married 49 years until Frank’s death. They raised 6 children and had a small farm that provided food for the family. She canned food for winter and sold excess food, cut flowers, walnuts, fruit, milk and eggs to neighbors and friends. Her cut flowers produced beautiful floral arrangements that she took to shut ins and people who needed cheered up. Evelyn also loved to go camping, take cruises, go on road trips, go fishing, and go dancing. She enjoyed a pilgrimage to Spain and France to visit shrines and cathedrals in 2011. Evelyn was a member of St. Wenceslaus Catholic Church for over seventy-five years and spent several years active in the St. Wenceslaus Altar Society. Evelyn is survived by her children, Bernard (Susan) Mares, Teresa (Bill) Chapman, Paul Mares, Steven (Barbara) Mares; her brother Alvin (Connie) Brown; her sister Liona; several grandchildren, great-grandchildren and many nieces and nephews. She was predeceased by her son John Mares; daughter Alice (Gary) Duncan; and husbands Frank Mares, Vaughn Larsen, and Joe Baker. Services will be held on August 27, 2020 at St. Wenceslaus Catholic Church in Scappoose. The rosary will be at 10:30 AM, with a funeral mass at 11:00 AM. Burial will follow at St. Wenceslaus Cemetery. Services being handled by Columbia Funeral Home. Please sign our online guestbook at www.columbiafh.com

The family of Evelyn Louise Baker created this Life Tributes page to make it easy to share your memories.

Send flowers to the Baker family.