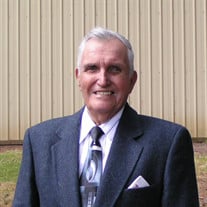 Floyd Nelson passed away May 1st, 2018 in Portland Oregon at the age of 96 after residing in Scappoose, Oregon for many years. Floyd was born December 20th, 1921 in Colchester, Illinois to Carl and Beatrice Nelson. Floyd and his wife Helen met in grade school and married on April 14th 1941, spending 77 years together. In 1942 after having their first Daughter Frances, they moved to a farm near Forest Grove, Oregon where they had their second daughter Beverly. They moved back to Colchester to have their first son Floyd (Roger) before moving to Scappoose, Oregon and having their daughter Josephine (Jo) and son Thomas where the Nelson family has continued to live since 1951. They now have 11 grandchildren, 16 great grandchildren, and 6 great great grandchildren. Floyd was a very hardworking man who throughout his life worked in coal mines, brickyards and shipyards, in agriculture, and working with Owens Corning for 25 years. He had many hobbies including fishing, camping, gardening, and carpentry. He enjoyed visiting the Snake River and gathering with family. Floyd is survived by his wife, Helen R. Nelson, his son Roger Nelson and his wife Lorry, as well as his daughters, Frances Wright and her husband Joe, Beverly Aklin and her husband Walt, Josephine Nelson and her husband Gil, as well as his daughter in law Lynn Nelson. He is also survived by his sisters Louisa Stallings, Izella Switzer, Beatrice Ann Adams, Rosalie Kennedy, and Linda Rice and her husband John. Floyd is preceded in death by his son Thomas Nelson and grandson Floyd Richard Nelson, as well as his siblings Ardella Ritchey, Alabama Shallenberger, Leonard Nelson, Gary Nelson, Thomas Carl Nelson, and Lloyd Nelson. A funeral service and reception for Floyd is to be held Tuesday May 8th 2018 at 11:00AM at Columbia Funeral Home and is to be followed by his interment at Columbia Memorial Gardens.

Floyd Nelson passed away May 1st, 2018 in Portland Oregon at the age of 96 after residing in Scappoose, Oregon for many years. Floyd was born December 20th, 1921 in Colchester, Illinois to Carl and Beatrice Nelson. Floyd and his wife Helen... View Obituary & Service Information

The family of Floyd F. Nelson created this Life Tributes page to make it easy to share your memories.

Send flowers to the Nelson family.