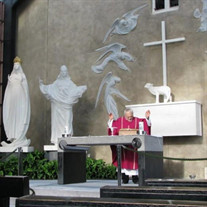 On June 29, 1941, Xaver and Florence Knusel welcomed their first child and only son, Frank Joseph Knusel, into their lives and took him back home to the family&#8217;s dairy farm in Scappoose Oregon to raise him. Known as &#8220;Lieutenant... View Obituary & Service Information

The family of Frank Joseph Knusel created this Life Tributes page to make it easy to share your memories.

Send flowers to the Knusel family.