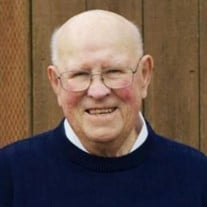 Fred “Fritz” Wayne Neilson was born July 6, 1928 at home in Stevensville, MT. His parents, Lorenzo J. Neilson and Effie M. Davis had six other children, all of whom have preceded Fred in death. Fred passed away peacefully at home on September 19, 2021. When Fred was four years old the family moved to Santa Monica, CA and later to Canoga Park, CA where Fred got most of his schooling. He played football and was known for his boogie woogie piano playing. After high school, he became a journeyman plasterer. He served a two-year mission in the Hawaiian Islands for the Church of Jesus Christ of Latter-day Saints (LDS) after which he served in the U.S. Army in Berlin, Germany during the Korean War. In Berlin, he played football, learned to sail small craft, and was in the MPs. Upon returning home, he met and married Winnie I. Gore in the St. George, UT LDS temple. They have six children: J. Tucker (deceased), Timothy (deceased), Lorna, Daniel, David (Lori), and Marie (Ben). They have twelve grandchildren and seven great grandsons (and another on the way). Fred attended Brigham Young University and finished his baccalaureate in physical education and his Master’s degree in education at California State University, Northridge (CSUN). He was a teacher at James Monroe and Nobel Junior High Schools in the San Fernando Valley, CA and then 22 years at North Hollywood High School, primarily coaching football, baseball and other sports. Upon retirement, the family moved to Seaside, Oregon where Fred coached the defense for Seaside High School football for six years. In 1994 they won the Oregon state championship. He built three of their family homes over the years and enjoyed carpentry, sailing and crewing with son Tim in competitive sailing races, backpacking, camping, gardening, playing piano, and reading. He served in many capacities in the LDS church including Bishop, High Counselor, teacher, youth leader and missionary. He was always loyal and dedicated to his family and his faith. He touched the lives of many and was very loved. A graveside service will be held in Fred's honor on Friday, September 24, 2021 at 11:00 AM at Columbia Memorial Gardens.

Fred &#8220;Fritz&#8221; Wayne Neilson was born July 6, 1928 at home in Stevensville, MT. His parents, Lorenzo J. Neilson and Effie M. Davis had six other children, all of whom have preceded Fred in death. Fred passed away peacefully at home... View Obituary & Service Information

The family of Fred "Fritz" Wayne Neilson created this Life Tributes page to make it easy to share your memories.

Send flowers to the Neilson family.