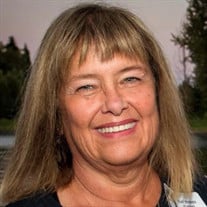 Gail Rene (Collie) Klobes of Scappoose, Oregon passed away on March 31st, 2022 at Legacy Good Samaritan Hospital due to Legionnaires Disease. Gail was born on October 20th, 1956 in Hood River, Oregon to her parents Lonnie and Betty Collie. Gail spent most of her life in Scappoose; she was a graduate of Scappoose High School class of 1974. After high school Gail married her soulmate Chuck Klobes on August 16th, 1980, and they remained in Scappoose to raise their family. Gail was employed by Western Bank Data Center until her son Dakota was born. She then became a household engineer. Four years later her daughter Karly was born, and this fulfilled the family she wished for. When the children were in elementary school Gail was employed by the Scappoose School District at Otto Petersen Elementary. Miss Gail, as known by the students, spent 25 years as a Teachers Aide until she retired in 2020. Gail cherished every moment she had with all the students that came through Otto Petersen School. The last 3 years of Gail’s life were dedicated to her family and the dream coming true of having two grandchildren, Jagger and Halsey. These two were the light of her life as she could not go a day without seeing them, either in person or FaceTime. Gail left this earth way too soon and will be missed by all. Gail is survived by her husband of 42 years Chuck Klobes, son Dakota Klobes, daughter Karlene Boss and son-in-law Wade Boss, grandchildren Jagger and Halsey Boss, and numerous nieces and nephews. Gail is preceded in death by her parents Lonnie and Betty Collie, and brother Gary Collie all of Scappoose, Oregon. A Celebration of Life will be held on Saturday April 23rd, 2022 at 2:00 pm at the Scappoose High School Auditorium in Scappoose, Oregon. If you wish to make contributions in honor of Gail, you can access this site online: http://spot.fund/yrcbOd, or send to PO Box 1535, Scappoose, Oregon 97056. Miss Gail’s Buddy Benches will be placed at Otto Petersen and Grant Watts elementary schools as a memorial to Gail.

The family of Gail Rene Klobes created this Life Tributes page to make it easy to share your memories.

Gail Rene (Collie) Klobes of Scappoose, Oregon passed away on...

Send flowers to the Klobes family.