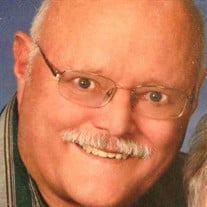 Gary Jack Stroh went peacefully to be with the Lord on July 26, 2019 in Portland, Oregon, not far from his home in Scappoose, Oregon. He was 76 years young. Gary was born the only child to Jacob Stroh, Jr. and Lydia (Brunmeier) Stroh in Loveland, Colorado on October 9, 1942. Growing up on the farm, he learned the power of dynamite, the power of hard work, and the value of family. Gary went on to Colorado State University and earned a bachelor in Education while finding the love of his life, Frances Dee Miller. They were joined in marriage in Florence, Colorado on August 8, 1964. To this union, God blessed them with two boys: Darren and Delton. Gary spent his career inspiring and encouraging high school students, teaching business related courses and working with students in academic concern. His teaching career began in Big Springs, Nebraska, where he and Fran taught for two years. They then moved to Loveland where Gary spent the next 33 years teaching and administrating. Gary received the Teacher of the Year award for the Thompson R-2J school district in 1986. Gary was the pioneer principal for the Herald Ferguson Alternative School in Loveland and also helped form the Brighton Alternative High School. He was a driving force and founding principal for the Loveland Christian High School as well. Gary loved working on cars, spending hours most every weekend working on fellow teacher vehicles who couldn’t afford to have their cars worked on in a professional shop. He also enjoyed camping, fishing and taking family vacations during the summer months. Every February, he would go “kick tires” which almost always resulted in a different car in the garage. Red Feather National Park was a place where one could often find the Strohs, and then down by the lake fishing. There were also multiple vacations that headed the family to California as he loved the beach and fishing on the ocean. In his later years, one of his favorite past times was boat fishing with Delton on the Columbia River. He will be forever remembered as the guy who would go to the county fair and could speak to both the chickens and pigs in their language without an accent. Gary’s faith in Christ was core to his being. In college, Gary saw his need for Christ’s forgiveness and let Christ have control. It was one of his most heart-felt desires to see all of his family find that personal vibrant relationship with Christ as well. Gary and Fran were founding members of Galilee Baptist Church in Loveland Colorado. They remained active members there until they moved to Bridgeport, Nebraska after retirement to be closer to family. There they became active in the First Baptist Church. When family moved on, they followed to Holdrege, Nebraska where they also became active members there at First Baptist Church of Holdrege until it was decided best to move to Oregon. Gary is survived by his lovely wife, Frances (Miller) Stroh and his two sons along with their wives: Darren and Monique (Hall) Stroh of Lamar, Colorado and Delton and Laura (Metko) Stroh of Oregon. He is also survived by 7 grandchildren: Jonathan with wife Bailey, Landen, Andrew with wife Shai, Elisabeth, Daniel, Matthew and Gracelynn along with cousins, other family and friends. A memorial service was held at Rose Valley Assisted Living Facility with Rev. Paul Metko officiating. The service was held on Thursday, August 1st at 10:00. A memorial service is tentatively to be held also in Loveland, Colorado with dates and times yet to be determined. In lieu of flowers, the family requests that you please send a card and share a memory of Gary with Fran. These will be put in a scrapbook for her to cherish. Send the cards to Darren Stroh ℅ First Baptist Church, 1600 S. Main Street, Lamar, CO 81052.

Gary Jack Stroh went peacefully to be with the Lord on July 26, 2019 in Portland, Oregon, not far from his home in Scappoose, Oregon. He was 76 years young. Gary was born the only child to Jacob Stroh, Jr. and Lydia (Brunmeier) Stroh in Loveland,... View Obituary & Service Information

The family of Gary Jack Stroh created this Life Tributes page to make it easy to share your memories.

Gary Jack Stroh went peacefully to be with the Lord on July 26,...

Send flowers to the Stroh family.