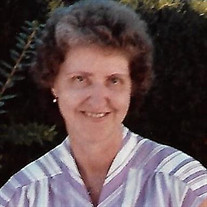 Gladys Mildred Winkfield was born on April 7, 1931 to Mildred Caroline Mallett Winkfield and Wayne H. Winkfield of Mancos, Colorado. She passed away on August 5, 2018. Gladys moved with her family from Mancos, Colorado to St. Helens, Oregon in 1941. She was a resident of St. Helens until 1993. Gladys then moved to Beaverton, Oregon in the summer of 1993. In 2011 she moved to Marquis Vermont Hills Nursing Home. Gladys began Elementary School in Mancos and the rest of her education was in St. Helens, Oregon. She graduated from St, Helens High in 1949. She worked at the bag factory and then became a telephone operator for Pacific NW Bell. She stayed with the company in St. Helens until 1963. She then transferred to Portland as a long distance operator until she retired in 1984 from US West Telephone. In 1984 Gladys put her caregiving talents to work by moving to Bonners Ferry, Idaho and caring for her three young neices for a year. Gladys never married but was always surrounded by her loving family and many neices, nephews, great neices and nephews and four sisters and brother-in-laws: Coralee Winkfield of Beaverton; Fern and Andy Anderson of Summner, Washington; Ruth and Dick White of MacMinnville, OR, and Carol and Jim Espe of Moscow, Idaho. Gladys loved her neices and nephews and made hooked rugs for each new addition to the family. She also loved traveling to new places and TV travel shows. She collected thimbles and Around the World dolls. We remember you, Gladys, in this quote, “When a loved one beomes a memory, a memory becomes a treasure.” The family treasures the memories of our beloved sister, aunt, Godmother, and great aunt,Gladys Mildred Winkfield.

Gladys Mildred Winkfield was born on April 7, 1931 to Mildred Caroline Mallett Winkfield and Wayne H. Winkfield of Mancos, Colorado. She passed away on August 5, 2018. Gladys moved with her family from Mancos, Colorado to St. Helens, Oregon... View Obituary & Service Information

The family of Gladys M. Winkfield created this Life Tributes page to make it easy to share your memories.

Gladys Mildred Winkfield was born on April 7, 1931 to Mildred...

Send flowers to the Winkfield family.