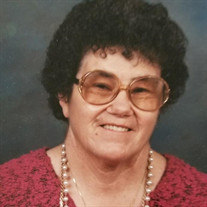 Gloria Bell went to be with her Lord on April 29, 2019 at the age of 88 years. At her side were her daughters, Truedy Lee Kirkham of Selah, Washington and Pamela Joyce Humphrey of Lincoln City, Oregon. Numerous grandchildren, great-grandchildren, relatives, and friends visited Gloria at her hospital bedside with prayers and support during this difficult time. Gloria was born on August 04, 1930 at the family homestead in Maple Falls, Washington as were all of her siblings before her to Mrs Stella Anna May and Mr. Bryon Frank VanBrocklin. Preceding Gloria in passing are her parents, sisters Emma Park, Mary VanBrocklin, Alice Gardner, Ethel Orne, and Martha Pietromonico, and her brothers Benjamin and Leon VanBrocklin. In addition, her first husband Mr. Leroy E. Snyder and her second husband Mr. Roy B. Bixell preceded her. Surviving is a brother, Byron VanBrocklin, two daughters and sons-in-law, eight grandchildren Kim, David, Jamie, Ashton, Tony, Gerri, Cris, and Beth with numerous great-grandchildren and great-great grandchildren. Gloria was also blessed with many nieces, nephews, cousins. Let us remember Gloria as a loving wife, mother, Sunday school teacher, Brownie and Girl Scout leader, and a loving friend to many. Her love and influence on children all around her was boundless, as was her love of animals, Mike, Queenie, Pitty-Pat, Rex, and Tuffy to name a few. Since 1965 Gloria was a devout member of the Assembly of God Church and The Morning Star Church both of Scappoose, Oregon. Gloria was always an immensely active woman with her love of the outdoors, her gardens and travels worldwide and in addition reading, puzzles of all kinds and family gatherings. A service officiated by Pastor Carol Thomas of The Morning Star Church will be held for Gloria at the Columbia Funeral Home located at 681 Columbia Blvd. in St Helens, Oregon. A reception will follow the service in the same building. A gathering of family and friends will also be held at The Morning Star Church at 33509 NE Williams St., in Scappoose, Oregon following the reception at the funeral home. The church congregation is graciously providing food and refreshment. The family sincerely hopes you will be able to attend this gathering. Please sign our online guestbook at www.columbiafh.com

Gloria Bell went to be with her Lord on April 29, 2019 at the age of 88 years. At her side were her daughters, Truedy Lee Kirkham of Selah, Washington and Pamela Joyce Humphrey of Lincoln City, Oregon. Numerous grandchildren, great-grandchildren,... View Obituary & Service Information

The family of Gloria Bell Bixell created this Life Tributes page to make it easy to share your memories.

Send flowers to the Bixell family.