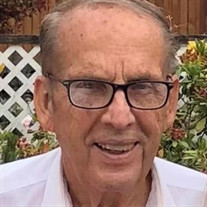 Gordon Dickie Gortler, 83, of Columbia City, died on October 2, 2021, in Portland, Oregon. Gordon was born two months early on August 4, 1938, in his aunt’s home near Yankton, Oregon, the third of five children born to Richard and Ada (Riggs) Gortler. His early years were spent in Yankton and Columbia City, and he attended schools in both places before graduating from St. Helens High School in 1957. During his school years he picked berries and was a member of the Future Teachers of America Club, National Honor Society, and was a member of the Student Council. He enjoyed dancing and spending time outdoors. He received a scholarship to Brigham Young University in Provo, UT, and financed his way through school, working summers at the Crown Zellerbach Paper Mill. He graduated in 1961 with a degree in secondary education and completed ROTC and went into the Air Force as a 2nd Lt. The next few years found Gordon in Mississippi and South Dakota where he met a beautiful nurse in training. After a brief courtship, he and Phyllis Jean Reed were married in the Salt Lake LDS Temple December 13, 1966. Gordon’s military assignments took the couple and their six children from South Dakota to Alabama and North Dakota, where he was involved with the Minuteman Missile Program. He spent over a year overseas in Turkey before returning home and being assigned to Vandenberg Air Force Base in California where he was the Missile Operations Officer. They spent the next fourteen years there, where Gordon was promoted to Lt. Col. He was an active member of the Church of Jesus Christ of Latter-day Saints and spent much time in Church service, including six years as bishop of the Lompoc 3rd Ward in California. After retiring from the military in 1989, Gordon returned to Columbia City and remained there the rest of his life. He was a substitute teacher for the St. Helens and Scappoose School Districts and oversaw a credit recovery program. He enjoyed spending time with his kids and grandkids, playing the piano, organ and accordion, working in the yard, garage saling, and family history. He will be missed by his six children: Aleen (Rob) Fuelling of Sandy, UT; Lynette (Bruce) Bradford of Layton, UT; Kevin (Julie) of Logan, UT; Kurt of St. Helens; Tiffany Gortler and Shawn Gortler of Columbia City; and sister Dottie Weitzel of Westport. He is also survived by 22 grandchildren and 5 great-grandchildren. He was preceded in death by his wife of 28 years, Phyllis in 1995; his parents, and siblings Theodore, Jannette, and Dennis. Funeral services will be held on October 9, 2021, at 11 am at the Church of Jesus Christ of Latter-day Saints in St. Helens and interment will take place at Columbia Memorial Gardens. Please sign our online guestbook at www.columbiafh.com.

Gordon Dickie Gortler, 83, of Columbia City, died on October 2, 2021, in Portland, Oregon. Gordon was born two months early on August 4, 1938, in his aunt&#8217;s home near Yankton, Oregon, the third of five children born to Richard and... View Obituary & Service Information

The family of Gordon Dickie Gortler created this Life Tributes page to make it easy to share your memories.

Send flowers to the Gortler family.