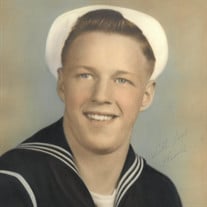 A sad day for so many that loved Harold Jacob Elder that passed away peacefully on April 10, 2018 at Spring Meadows Assisted Living in St. Helen's, Oregon. He was 92 years young. Harold was born in Defiance, Iowa to Albert and Emma Elder on July 1, 1925. We were all lucky that he was born the 8th of 10 children. Harold's family moved to Council Bluffs, Iowa where he attended school but seemed to know how to get into some kind of mischief along the way. He then worked at the Hinky Dink grocery store and as we all know Harold was a very hard worker and fun to be around. Harold then joined the U.S. Navy during World War II and was stationed in San Diego. He was trained and worked his way up to be a U.S. Navy medic and sailed on two Destroyers, the USS O'Brien and the USS Lofberg where he could always tell you great stories. Harold witnessed the testing of the nuclear bombs in July of 1946 off Bikini Atoll. As the underwater testing was set off they had Harold sketch the Magnificent Wilson (mushroom) Cloud that occurred after the bomb was detonated. In 1947 Harold married his wife Betty in Council Bluffs, Iowa. They had two daughters, Lynda and Susan. After being honorable discharged from the U.S. Navy his family lived in Council Bluffs until 1952 then they relocated to Saint Helens, Oregon where they later had their son David. Harold worked at Bill Phillips delivering groceries and then retired from Safeway. Harold painted many of the advertising signs for businesses around town. He loved being a Cleveland Browns fan, collecting candy PEZ dispensers and spending time with family and friends. He also loved woodworking and watching all the birds come and go in his yard. Harold is survived by his daughter Susan Reynolds and her husband Steve. His son David Elder and his wife Susie. Harold has 6 grandchildren and 8 grandchildren. His wife Betty and daughter Lynda Sinner preceded him in death. Donations can be made to St Jude's hospital or Portland Legacy Hospice in lieu of flowers.

A sad day for so many that loved Harold Jacob Elder that passed away peacefully on April 10, 2018 at Spring Meadows Assisted Living in St. Helen's, Oregon. He was 92 years young. Harold was born in Defiance, Iowa to Albert and Emma Elder on... View Obituary & Service Information

The family of Harold Jacob Elder created this Life Tributes page to make it easy to share your memories.

A sad day for so many that loved Harold Jacob Elder that passed...

Send flowers to the Elder family.