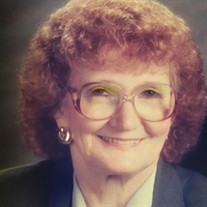 Helen R. Nelson passed away December 30, 2021, at the age of 97 after residing in Scappoose, Oregon for 70 years. Helen was born January 19, 1924, in Macomb, Illinois to Joseph and Grace Willard. Helen married her childhood sweetheart, where they met in grade school. They got married April 14, 1941, getting to spend 77 years together. In 1942, after having their first daughter Frances, they moved to a farm in Forest Grove, Oregon, where they had their second daughter Beverly. They moved back to Colchester, Illinois and had their first son Floyd (Roger) before moving to Scappoose, Oregon and having their daughter Josephine (Jo) and son Thomas, where the Nelson family continued to live. They had 11 grandchildren, numerous great-grandchildren and great-great-grandchildren. Helen was a dedicated wife, mother and grandmother. Her home was always open to all. She loved her family gatherings and enjoyed camping and sewing. Helen’s greatest love was her family, she loved spending every awakening hour with them and along the way picked up many “bonus” kids and grandkids. No one was a stranger once they entered her door. She took everyone under her wing and made them feel loved. Helen is survived by her son, Roger Nelson and wife Lorry; as well as daughters, Frances Wright and her husband Joe, Beverly Aklin and her husband Walt, and Josephine (Jo) and her husband Gil; as well as her daughter-in-law Lynn Nelson. She is also survived by many grandchildren, great-grandchildren, and great-great-grandchildren. Helen was preceded in death by her husband Floyd Nelson; son Thomas Nelson; and grandson Floyd Richard Nelson. A funeral service will be held at Columbia Funeral Home on Friday, January 7 at 1:00 pm, with a graveside service to follow at Columbia Memorial Gardens.

Helen R. Nelson passed away December 30, 2021, at the age of 97 after residing in Scappoose, Oregon for 70 years. Helen was born January 19, 1924, in Macomb, Illinois to Joseph and Grace Willard. Helen married her childhood sweetheart, where... View Obituary & Service Information

The family of Helen Ruth Nelson created this Life Tributes page to make it easy to share your memories.

Send flowers to the Nelson family.