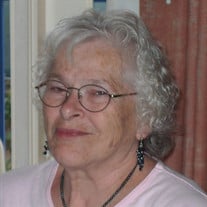 Helen Lucille Plantz passed away peacefully of natural causes in her own home in Scappoose Oregon on October 18th 2018 at the age of 79. Helen will always be remembered as a loving Mother, Grandmother, and Great Grandmother, with her willingness to help others and a huge heart for all, she touched everyone she met. Helen was born on June 9th 1939 in Elyria, Ohio to Charles and Wanda Smith. She spent part of her childhood there before moving to California with her family. Completing an associate's degree in accounting, she spent her career running the cash office for Montgomery Wards, Chase Packaging and Office Depot. She married the love of her life, Ronald on February 14th 1959, they had four sons. The couple moved to Oregon with their boys in the early 70’s. When he passed away in 1978 leaving Helen to raise four teenage boys on her own. Helen devoted her time to her family, she could often be found attending her grandchildren and great grandchildren’s school and sporting events. She was also very devoted to her faith in attending Scappoose Foursquare Church and bible study groups. Later in life she adopted an abused dachshund, Molly whom became her best friend. Survived by; Sons; Walter Plantz, Wesley Plantz, Wayne Plantz and Wendell Plantz. Sisters, Jean Smith and Joan Underwood. Grandchildren; Kriston, Trisha, Jessica, Katrina, Traci, Kelly, Nicole, Whitney, Michael, Joseph, Jacob and their spouses. As well as 18 Great Grandchildren. Predeceased in death by; Husband Ronald, her parents Charles and Wanda Smith and her brother Irwin Smith. Helen will be laid to rest next to her one true love at the Green Mountain Cemetery in Rainier, Oregon. A public memorial service will be held October 30th 2018 at 1:00 pm in Scappoose at the Scappoose Foursquare Church. In lieu of flowers the family asks that donations be made to Scappoose Foursquare Church in Helen's name.

Helen Lucille Plantz passed away peacefully of natural causes in her own home in Scappoose Oregon on October 18th 2018 at the age of 79. Helen will always be remembered as a loving Mother, Grandmother, and Great Grandmother, with her willingness... View Obituary & Service Information

The family of Helen Lucille Plantz created this Life Tributes page to make it easy to share your memories.

Send flowers to the Plantz family.