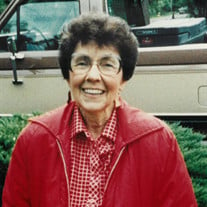 Helen Sharp (March 28, 1921 – February 6, 2020) passed away peacefully, after a wonderful and active 98 years. She was born in Astoria, Oregon, daughter of Curtis and Leena Cole, and soon moved upriver to Saint Helens, where she lived most of her life. Helen was married for sixty-four years to her loving husband, Robert Sharp Jr. who preceded her in death. She is also preceded in death by her six siblings: June Lagler, Olive Neely, Hazel Ambrose, Art Cole, Charles Cole and Curtis Cole. She also grieved the loss of her oldest son, Robert (Bob) Sharp. Helen spent her early married life as a mother and wife of a logger in Spruce Run, Oregon. She and Robert later moved back to Saint Helens to raise their two sons. Helen was a member of the Episcopalian Church, and active in many volunteer organizations in town. She had a long career at Safeway, where she retired after 32 years of service. She spent her free time gardening, canning, cooking, baking and sewing. She enjoyed all the bounties of the Pacific Northwest, including fishing, hunting, clam digging and camping. Mostly, she enjoyed spending time and sharing her gifts with family and friends. Helen is survived by her son Ben Sharp, and his three children, Brent Sharp, Robyn Toschi and Shelley Davidson, Bob’s children: Leslie Apker, Gordon Sharp, Bobby Sharp and Laura (Dede) Flagg, as well as several grandchildren, great grandchildren and great great grandchildren. She leaves behind many other friends and family members that will miss her spunky attitude and generous nature. Helen was laid to rest in the Columbia Memorial Gardens beside her husband and son on February 15th. Services will be held Saturday, March 7, at 1:00 at the Columbia Funeral Home. A reception will follow at the St. Helens Elks Lodge – 350 Belton Road.

Helen Sharp (March 28, 1921 &#8211; February 6, 2020) passed away peacefully, after a wonderful and active 98 years. She was born in Astoria, Oregon, daughter of Curtis and Leena Cole, and soon moved upriver to Saint Helens, where she lived... View Obituary & Service Information