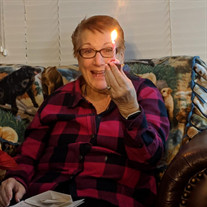 Hilda Jean Hoffman and those that know her know that she did not like her first name. She went by Jean everywhere she went in life. Jean Hoffman, 74 years, passed away peacefully in her sleep in Beaverton, Oregon. She was born in Washington, Indiana January 8th, 1947. She was the youngest of five children. Sisters Si Miller & Beth Vanover, Brothers Dwight Vanover & Lewis (Price) Vanover. Jean grew up in Adair Oklahoma. She married Richard Hays in 1966 and had two sons Richard and Donald. Jean was divorced in 1972 and during this time, she lived in Vancouver, Washington. Jean married Clarence (Kelly) Christensen in 1975 in Vancouver, Washington. Kelly passed away 9 months later. Jean took over the Christensen Livestock Transfer and was the only female truckdriver in the area. She hauled cattle, goats, and sheep all over the greater Pacific Northwest. In her travels, Jean met William (Bill) Hoffman, and they fell in love and were married in 1977. She bought the farm/land and Bill bought the dairy cows to start their own Dairy in Deer Island, Oregon. This is how they started their lives together. In 1978, Jean’s third son Kevin was born. She continued to haul cattle to the stock yards and help in the operations of the Hoffman Dairy Farm for many years. When the prices for milk went through the floor they got out of the dairy business. Bill went to work in construction and Jean started teaching in the Rainier School District. She has missed the love of her live for many years now who passed in 1997. While raising four boys, Jean also returned to college. She completed her Associate Degree in education from Lower Columbia College. Her Bachelor’s Degree from Portland State University. Jean taught full time in the Rainier School District and completed her Master’s Degree at Western Oregon University. After many years of teaching, she then earned the position of Vice Principal for the Rainier Middle and High School, which she truly enjoyed. When she finally retired from teaching/administration and she missed it so much that she signed up as a full time substitute for Clatskanie, Rainier, St Helens & Scappoose School Districts. In her desire to be doing something productive she helped guide student teachers for City University and was a CASA volunteer. This job was the epitome of who she was. Being a CASA volunteer was not easy and once she was certified she made it her job to represent those children with everything she had. In her retirement she also enjoyed traveling, making trips to Europe, Florida, the Caribbean, Texas, and multiple roads & graduation trips with her grandkids. Jean had a love for sewing. In her younger years she made a lot of the Christmas ornaments for her trees. She made baby quilts for her grandkids that are truly a treasure now. Then she started the tradition of making Christmas Stockings for all her family members. Each time a new person became a member of the family she would welcome them with a handmade Christmas stocking that year. Her boys and grand children loved the game of soccer! There was always one more game or tournament to run to. During soccer season she made plans to do almost nothing else on Saturdays. One of her friends reminded us of how hitting Garage Sales was almost a religion for her. She loved shopping and also was determined to find the best bargain she could. Jean had a huge group of friends (the girls) at school, as part of her TOPS group and outside of school. These ladies were such an awesome support system for her when she lost Bill to cancer in 1997. They continued to stand by her for the next 24 years. She loved to throw a party for her “girls!” The house had to be decorated and the meal was planned with all the details. She hosted many game nights, dinners, parties, etc. Family was extremely important to Jean. She loved to host all holiday meals and the weekly family dinner. It was her gift to the family to bring us all together. She was diagnosed with Progressive Aphasia in 2015, which progressed into Dementia. She is survived by her children… Richard Hoffman of St Helens, OR, Donald Hoffman of Prineville, OR, Kevin Hoffman of Ridgefield, WA, and Donnie Hoffman of Portland, OR. She had three stepchildren also, Barbara Inman of California, Christine Kerstulovich of Oregon, and Billie Hoffman of Hawaii. This wonderful giving & loving lady will be dearly miss by all who knew & loved her.

Hilda Jean Hoffman and those that know her know that she did not like her first name. She went by Jean everywhere she went in life. Jean Hoffman, 74 years, passed away peacefully in her sleep in Beaverton, Oregon. She was born in Washington,... View Obituary & Service Information

The family of Hilda "Jean" Hoffman created this Life Tributes page to make it easy to share your memories.

Hilda Jean Hoffman and those that know her know that she did...

Send flowers to the Hoffman family.