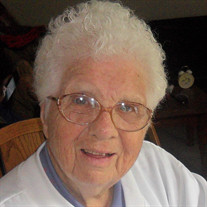 Irene May (Goff) Brundage July 10, 1924 ~ February 13, 2018 Irene May (Goff) Brundage was born to Cyrus and Gladys (Rodgers) Goff on July 10, 1924 in Nebraska City, Nebraska. In 1926 her family moved to Dunbar, Nebraska where they lived until her father became ill with a heart condition. This condition made it necessary for the family to move back to Nebraska City. Her father was bed ridden for three months before his death October 1926 at the age of 27. When Irene was 6 years old her mother Gladys married James Portis. Shortly after May of 1929 the family moved to Council Bluffs, Iowa. Irene grew up during the depression which was hard times for everyone, especially those without employment. Irene and her family were very poor but made do with what they had. They were always happy they had each other for support and always had fun just being together. As a child Irene did not have many toys so the kids played games together. Irene’s and her cousins took turns staying at each other’s house in the summer time which was great for both families. Irene remembers having to walk to school quite a ways. In the winters that walk was usually made in knee deep snow. She feels she was lucky that she stayed healthy because her family could not afford to go to the doctor. In 1941 the family crowded into a car and drove to Scappoose, Oregon, which was about a 2500 mile trip. It was a hard trip, sleeping in the car and on the ground. This is the only means of making that long trip that the family could afford. When the family got as far as Bonneville Dam in Oregon the old car broke down and just would not go any further. They called upon their family members in Scappoose to pick them up and take them to Scappoose. Most of Irene’s school days there was not much money for new school cloths, but the summer before her 11th grade she found a job picking cucumbers. She remembers that she had never seen anything like a cucumber patch and thought it was very strange looking. During her 11th grade at Scappoose High School she met Walter Brundage of Scappoose. Shortly after meeting, Irene and Walter starting dating and continued until their marriage on July 25, 1943. They were married in Scappoose, Or in the living room of Walter’s parents by Reverend Wright of the 1st Congregational Church in Scappoose. Irene and Walter both loved to dance, especially their Saturday night dances at the Skyline Barn Dance Hall which is where they went almost every Saturday night. When their kids were old enough they would take them. The kids remember watching them whirl around the dance floor to the beat of the music. Irene and Walter were blessed with two beautiful children, John Walter and Diane Marie. Irene was very involved in her children’s school years volunteering as a room mother and a brownie and Cub Scout leader. She was always there for them in anything they did. Irene made most of the children’s cloths when they were small. She especially enjoyed baking, making the families’ favorites of cinnamon rolls and fresh baked bread. Along with their children Irene and Walter loved to go camping, especially at the beach. They also enjoyed attending the Beaver Baseball games in Portland, Oregon. She remembers the snacks for the kids cost more than the game tickets themselves. After their son left for the Air Force they traveled to Missouri to visit him, his wife and their first born grandchild Jeana. Irene and Walter did not have the opportunity to travel much during their married life but really enjoyed their trips to Missouri and the beach. When they were at home in Scappoose they enjoyed spending time with their daughter Diane, her husband and two of their grandchildren Kirstin and Robert. They spend many years going to Kirstin and Roberts’s school events and programs. Robert always told her that she was the greatest fan that anyone could have. They had them stay with them as often as possible so they could spoil them as most grandparents do. As time went on they continued to enjoy all of their children, grandchildren and great grandchildren keeping up on what was happening in their lives and showing constant support. As Diane and John grew up they remember thinking that Mom and Dad must have given up a lot of themselves because they never seem to go without. John and Diane always had what they needed or wanted, whether it be the football shoes or the prom dress. There wasn’t much time for outside activities when the children were growing up but once they were on their own Irene did get involved with the Rebekah Lodge in St. Helens, Ore. Something she gave a lot of love and time to. Irene also babysat for several children who needed her loving ways, especially one of her great grandchildren Timothy. Irene and Walter moved from their family home at the corner of North Road and Columbia Ave in 1993 to an apartment on SW EM Watts. This apartment was a better fit for them as there was very little maintenance for Walter to do. Irene and Walter had 52 years of marriage. During these 52 years there was happiness, struggles, tears, and faithfulness. Because of their commitment and love for each other they were able to make it through all of the ups and downs. Irene was preceded in death by her husband Walter in 1995 after 52 years of marriage. Irene is survived by their son John Brundage and his wife Jennifer, daughter and husband Diane and Gary Ross, Sister Darlene, several grandchildren great grandchildren, nieces, nephews and many friends. Irene always said her family was her greatest joy in her life. Irene will always be remembered as the lady who always gave of herself to her family and friends and asked nothing in return.

The family of Irene May (Goff)Brundage created this Life Tributes page to make it easy to share your memories.

Send flowers to the (Goff)Brundage family.