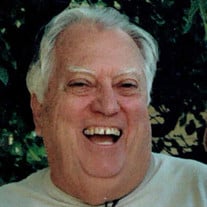 James E. Cross of St. Helens, Oregon passed away at age 90 on January 23, 2022, due to long-suffering dementia and a sudden internal bleed. Jim was born in Temple, Texas to Cecil and Mary Lee Cross on October 1, 1931. He was a Korean War Veteran and served in the US Fourth Army Band. After the war, Jim came home and enrolled at Sam Houston State University, but quickly moved to North Texas State University where he played his trombone in the One O’clock Lab Dance Band and earned a bachelor’s degree in Business. After college, he went on the road with the Hal McIntyre Band and traveled all over the globe playing his trombone. While visiting a friend in Texas, he was introduced to the love of his life, Elizabeth Anne Carroll, and left the road for good. The two were married on October 12, 1958 in Fort Worth, Texas, and were married for 63 years. They had two children together, Deborah and Jody. Jim was a Past Master & life member of St. Helens Masonic Lodge No. 32; a 32nd Degree Master Mason with the Scottish Rite, a member of the York Rite; past Worthy Patron & life member of Mizpah Chapter 30 Order of the Eastern Star; a life member of the Al Kader Shrine; and was a past dad advisor of Columbia Chapter DeMolay in St. Helens. Jim was also a recipient of the DeMolay Legion of Honor, the highest award that is presented to any member or advisor. Later in life, Jim brought his trombone out of storage and began playing again in the Al Kader Shrine Concert Band. Jim was preceded in death by his parents, Cecil & Mary Lee Cross; brother Robert Cross; sister Mary Elizabeth Fuller; and sister Ruth Ann Nelson. Jim is survived by his wife, Elizabeth Anne Cross; daughter, Deborah (Cross) Marquardt and spouse David; son, Jody Cross and spouse Kandia; grandchildren- Brian Marquardt and spouse Meagan; Joshua Marquardt; Kallee Cross; and Jered Cross and spouse Lexi; sister, Sally Hunnicut; one niece and five nephews. Jim was a devoted husband and father. Camping, fly fishing, hunting, salmon fishing, water skiing, snow skiing, travelling all over the Northwest and into Canada… the Cross family did it all together. He taught by example the value of family, loving your spouse, and how to enjoy life. In his later years, he didn’t want his sweetheart to be away from his side and would have a fit if she left the room for any reason. We can only hope that he is behaving himself as he waits for her now at the Pearly Gates. We already miss him horribly, but are so thankful he is now with his Heavenly Father and no longer suffering. It’s not goodbye, but “see you soon”, Poppa. A graveside & Masonic service will be held at the St. Helens Masonic Cemetery at a future date.

James E. Cross of St. Helens, Oregon passed away at age 90 on January 23, 2022, due to long-suffering dementia and a sudden internal bleed. Jim was born in Temple, Texas to Cecil and Mary Lee Cross on October 1, 1931. He was a Korean War... View Obituary & Service Information

The family of James Edward Cross created this Life Tributes page to make it easy to share your memories.

Send flowers to the Cross family.