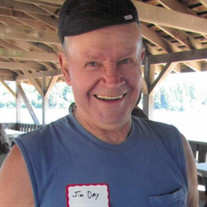 James “Jim” Parker Day, 84, a longtime resident of Scappoose, OR, died Thursday, March 25, 2021. He was born June 1, 1936, in Sunset Beach, OR to Vincent Parker Day and Frances Haworth Day. He was raised in Hammond, OR and in 1953 joined the army serving in the 38th infantry in Fort Lewis, WA. After returning from the service he relocated to Portland, OR where he met and married Eileen Vandos. They shared 62 wonderful years together. Jim worked in various construction and salvage jobs in the Portland area before moving his family to Scappoose, OR in 1965 where he owned and operated Jim Day Autowrecking and Towing until 1975. He later worked as a warehouseman and pattern burner for Standard Steel in Portland. Jim had a lifelong love of old cars and enjoyed puttering in the yard, reading and working crosswords. He loved being with family and friends and was known and loved for his generosity and making people laugh. He is survived by his daughter Loretta “Lorie” Day of Everett, WA and daughter and son-in-law, Sandra and Robert Coe Jr. of Greensboro, NC; a brother and sister-in-law, Robert and Febe Day of Camano Island, WA, and three sisters, Margaret Milliern or Tacoma, WA, Pat Sandels of Sacramento, CA, and Charlotte Nicholls of Portland, OR; five grandchildren; seven great-grandchildren; and numerous nieces and nephews. He is preceded in death by his wife Eileen; his son Jerry; three brothers, Lionel, Howard and David; and three sisters, Pearl Biddle, Dorothy Davis and Mary Sylvester. A graveside service will be held for Jim on April 9, 2021 at 2:00 PM at Columbia Memorial Gardens, in Scappoose, OR. Please sign our online guestbook at www.columbiafh.com

The family of James "Jim" Parker Day created this Life Tributes page to make it easy to share your memories.

Send flowers to the Day family.