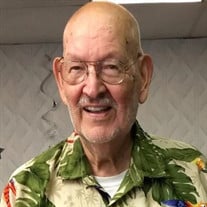 Longtime St. Helens resident James “Jim” Otis Dias passed away in Portland, Oregon on May 24, 2021 at the age of 82. Jim had a gift of making those around him feel comfortable and he was a friend to all who knew him. Jim was born in Las Vegas, New Mexico on August 2, 1938. His family moved to southern Texas when he was a young boy. Agriculture was a huge part of his youth as he raised hogs and milo grain. He graduated from Lytle High School and earned varsity letters in football, basketball, track and tennis. He went on to Southwest Texas State College in San Marcos. He joined The Reserve Officers’ Training Corps (ROTC) program in high school and continued on in the Air Force ROTC program in college. At the start of his sophomore year, he decided to attend the freshman orientation where he met his future wife, Dorothy Maler. Their connection was instant, they became engaged within the year and married October 3, 1958. They finished their college degrees and Jim graduated with a triple major in Biology, Agriculture and Education. Following graduation, Jim and Dorothy packed up their Ford Ranchero and headed out for Jim’s first job working for the United States Department of Agriculture as a food inspector. While Jim held this position they traveled to Michigan, Utah, Oregon, Florida and Texas while sightseeing along the way. In 1966, they decided to put down roots in Drain, Oregon as they were expecting their first child. Jim started his teaching career to share his love of Agriculture in the classroom and served as advisor to Future Farmers of America. Bryan Kelly was born April 9 of that year, and their adventure of parenthood began. Two years later they added their daughter, Lisa Suzanne, to their family. Jim decided to return to the USDA working as a loan officer in The Dalles. They moved to St. Helens as well as Hillsboro while Jim held this position. Deciding they wanted to be closer to family, Jim and Dorothy moved back to Texas for several years. Missing Oregon and their friends there, they moved back, settling in St. Helens. Jim served as the Columbia County Supervisor for the Farmers Home Administration for many years. In 1979, Jim’s entrepreneurial spirit emerged and he decided to start his own real estate business, Empire Real Estate, and James Dias Insurance agency (Farmers Insurance). He and Dorothy ran the businesses for almost 40 years. He also was a real estate appraiser, a manufactured home park developer and a businessman in many other real-estate related ventures. Jim also proudly served in the military for over 40 years. He served three years in the Air Force then continued his military service in the Army. He received his commission in the U.S. Army and retired as a Lieutenant Colonel. His fellow soldiers were like his second family. Jim lived in St. Helens for more than 50 years and was involved in his community. He was a longtime member of the Scappoose Church of Christ. He was extremely generous and enjoyed lending a hand to those around him. Jim had a true love of people. Jim enjoyed traveling the world. He took many cruises with his family and traveled to destinations such as the Caribbean, the Mediterranean, Mexico and the Panama Canal. He also traveled on guided tours to Egypt and European countries. Jim is survived by his wife of 62 years, Dorothy Dias; son Bryan Dias (wife Lisa) of Shelton, Washington; daughter Lisa Oliver (husband Steve) of Lake Oswego; grandchildren Zoe Dias, Andrew Oliver and Ryan Oliver; sisters-in law Mildred Love and Betty McBride; brothers-in-law Robert Maler and Gerald McBride; multiple nieces and nephews as well as friends throughout the world. He was preceded in death by his parents Jose and Lucile Dias, brothers-in-law George Maler, Jim Maler and Orval Love. A viewing will be held for Jim on June 1 between 2 – 4 pm for visitation by friends. This will be held at Columbia Funeral Home located at 681 Columbia Boulevard in St. Helens. Jim’s celebration of life service will be held June 2 at 10 am, but space is extremely limited due to COVID restrictions so please join us instead via live video by clicking on this link: Join Zoom Meeting https://us02web.zoom.us/j/85622998143?pwd=WVEwV1lXc2ZsQ21Ga3ZMeW5DRmsyQT09 Meeting ID: 856 2299 8143 Passcode: 764139 For those of you who wish to make a donation in Jim’s honor, please consider these organizations: Legacy Health Comfort Care (www.legacyhealth.org/giving-and-support/causes/hospice; Scappoose Church of Christ (www.scappoosechurchofchrist.org/home.html); Wounded Warrior Project (www.wounded warriorproject.org/).

Longtime St. Helens resident James &#8220;Jim&#8221; Otis Dias passed away in Portland, Oregon on May 24, 2021 at the age of 82. Jim had a gift of making those around him feel comfortable and he was a friend to all who knew him. Jim was... View Obituary & Service Information

The family of James "Jim" Otis Dias created this Life Tributes page to make it easy to share your memories.

Send flowers to the Dias family.