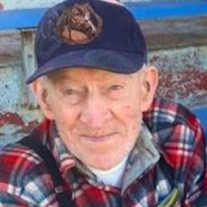 On February 12, 2022, James H. “Jim” Rinck Sr. ended his 93 year 7 month 2 day stay on this plane of existence. Born in Banks, Oregon in July 1928 to Frank & Gladys Rinck, he was the youngest of three children. He also lived in Deer Island before moving to Rainier as a child, where he remained for the rest of his life. Although he always thought of himself as a farmer, Jim worked in a sawmill for a short time, then was a self-employed horse logger before joining the Laborers Union and working in construction until his retirement. He was preceded in death by his wife of 70 years, Valancia “Deedee” (Devine)Rinck, son David Rinck at 1 year of age, his brother Robert Rinck, and sister Anna Marie Clausen. He is survived by his children, Elaine (Dick) Watkins, Jim (Kathy) Rinck Jr., Kathy (Bob) Kennedy, Linda (Mike) Johnson, & Steve (Kristi) Rinck, 10 grandchildren, 9 great-grandchildren, & 1 great-great grandchild. A funeral service will be held in Jim's honor Saturday, February 19, 2022 at 2:00 PM at Alston Corner Assembly Church in Rainier, Oregon. A committal service will immediately follow at Hudson Cemetery in Rainier, Oregon.

The family of James "Jim" Henry Rinck Sr. created this Life Tributes page to make it easy to share your memories.

Send flowers to the Rinck family.