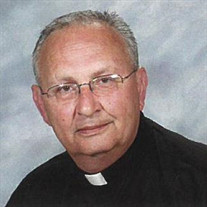 Father Jim Stange, 66, was found deceased in his residence at St. John Vianney on Monday evening, April 30. There will be a funeral Mass at 11 a.m. Friday, May 18, at St. Wenceslaus Church in Scappoose. The burial will follow immediately afterwards at the parish cemetery behind the church and a reception in the parish hall. Father Stange, one of four brothers, was born July 5, 1951, in Milwaukee, Wisconsin, to William and Joan Stange. Father Stange attended elementary and secondary school in Pomona, California. He moved to Aloha in 1969 to pursue his work with horses, which he helped to raise and show, especially quarter horses. He began taking college courses in 1983 at Portland Community College and entered the pre-theology program at Mount Angel Seminary in 1987. He received a bachelor’s degree in 1989 from Mount Angel. He was accepted as a seminarian for the Archdiocese of Portland in 1990, and he continued his theology studies. He was installed as a lector at Mount Angel Seminary in November 1991 by Auxiliary Bishop Kenneth Steiner and Archbishop Levada received him as a candidate for ordination in October 1993. He completed his pastoral year at St. Cecilia Parish in Beaverton in 1994. In 1994, Archbishop Levada ordained Father Stange, then 43, to the diaconate. The ceremony took place at St. Cecilia Church. Father Stange’s additional pastoral training was at Oregon State Hospital in Salem, the HIV Day Center in Portland, St. Joseph Hospital in Orange, California, and the St. Mary Parish Faith Formation program in Mount Angel. Father Stange served his pastoral year at Immaculate Conception Parish in Stayton. Archbishop Levada ordained Father Stange to the priesthood in 1994 at St. John the Apostle Church in Oregon City. He was assistant pastor at St. Mary Parish, Eugene, from 1995 to 1999 and pastor at St. Wenceslaus Parish, Scappoose, from 1999 to 2012, when he retired. In addition, he was assigned to assist with the pastoral care of St. Mary Parish in Vernonia in 2000. In his retirement years, Father Stange’s dogs were companions as well as his hobby. His yellow Labrador “Father Jim’s Rebel Yell,” Judah for short, was a national champion hunter retriever seven years in a row. Judah’s daughter Ezra was also a champion in her younger days. “I don’t know what I’d do without her,” he told the Catholic Sentinel in 2016. “If I’m gone for several hours, I come home and it’s like coming home to family. You’re not walking into an empty house. No matter what kind of mood you’re in, they love you unconditionally.” Obituary is from Catholic Sentinel.

Father Jim Stange, 66, was found deceased in his residence at St. John Vianney on Monday evening, April 30. There will be a funeral Mass at 11 a.m. Friday, May 18, at St. Wenceslaus Church in Scappoose. The burial will follow immediately afterwards... View Obituary & Service Information

The family of Fr. James "Jim" Robert Stange created this Life Tributes page to make it easy to share your memories.

Father Jim Stange, 66, was found deceased in his residence at...

Send flowers to the Stange family.