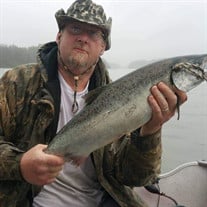 James “Jim” Lokken, Husband, Son, Father, and Friend. Jim was born November 09, 1964, in Saint Helens, Oregon. He was a man that couldn’t be put into a box, how to describe him, how he impacted those around him, and how he lived his life. He had a way of making anything he did seem easy. His passion for nature, being on the water, and spending time with his family were undeniable. Was it really a good day if you haven’t fought a fish? Heard a duck’s call? Laughed so hard you made your wife cry a little? I think everyone knows Jim’s answers to these questions Anyone that has met Jim has heard a story of the biggest fish you have ever seen, or learned a new technique to brine your herring. That was the thing about Jim. He always wanted to talk to you. He always wanted to make you laugh. Teach you something new. Or hear about your day. He always found a way to find something special in a moment. That was something Jim was so good at. Finding meaning in moments that seem larger than life. He never went into anything with a half heart. He couldn’t And he loved. He loved hard and loved so much. His mark on the lives of those around him will not be soon forgotten. He knew how to bring people together and to make any room seem lighter. He is survived by His Wife of 23 years, Brandy Lokken; His Daughter, Mckenna Lokken; His Son, Jacob Stafford; and the entire Lokken, Shadley, and Scholl family. We will all miss him so much; grieving his loss will be a very long and difficult journey. Jim was a Jack of All Trades. He spent his life following his passions. Working on boats, teaching his family to hunt and fish, he never missed a Nascar race, and you knew he was getting closer when you could hear AC/DC getting louder. Jim had been battling several chronic illnesses over the past couple of years. They made it increasingly difficult for him to enjoy the things in life that made him the man who he was. Late in the evening April 28th, 2022, Jim passed on, at peace, in the comfort of his home in Scappoose, Oregon. He was 57. We will greatly miss him, but know he is no longer in pain.

The family of James Edward Lokken created this Life Tributes page to make it easy to share your memories.

Send flowers to the Lokken family.