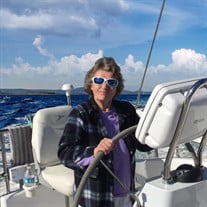 Janet Mary Sharron Ames was born October 5, 1934 in Lackawanna, New York adopted by Roswell and Margaret Sharron. Janet had one adopted brother named William (Bill). Janet grew up in Plattsburgh, New York where she spent her summers boating and winters ice-skating on Lake Champlain. Janet attended Marymount College where she earned a Bachelor in Philosophy and later went on to Georgetown University to obtain a Master’s Degree but did not graduate. Janet met Robert Long Ames at the local SAC airfield where he was stationed while doing a radio station in Plattsburgh. Jan was the ‘Hometown girl” but it was her fantastic legs that first attracted Bob to Jan! They were married in 1956 and had 5 children: Sharron, Robert, Peter, Albert and Margaret. Janet ran her father’s machine shop with her brother Bill. After Janet and Robert divorced in 1975 she lived in Woodside, California, then later Aptos and La Selva Beach, Oceano, Cayucos, and Paradise, California. She loved the ocean and the marine coastal climate. She obtained her Real Estate license and sold Real Estate for the rest of her career. Janet loved to sew, crochet, write children’s stories and manipulate photographic images in her favorite digital paint programs. After the Paradise Campfire, Janet was uprooted and spent 8 months with her son, Robert, in Fremont, California and 7 months with her daughter, Margaret in Scappoose, Oregon. Janet died July 18, 2020. Janet is preceded in death by her brother Bill. Janet is survived by her 5 children and 5 grandchildren. Janet’s wishes are to have a Roman Catholic Mass which will be held at The Holy Cross of Santa Cruz-Holy Cross Catholic Church in Santa Cruz, California in March 2021, her ashes placed in the Alta Mesa Memorial Cemetery in Palo Alto, California as well as spread in the Pacific Ocean. The family will also have a celebration of life after the Mass. Please contact Margaret Ames at [email protected] for more information.

The family of Janet Ames created this Life Tributes page to make it easy to share your memories.

Send flowers to the Ames family.