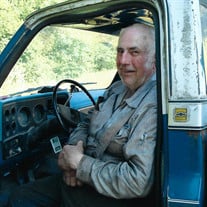 John Allan Petersen, 83, died at his home on May 29, 2018. A lifelong resident of Columbia County, John grew up in Shiloh Basin, later moving to Deer Island. By age 15, John was working as a choker setter at the Oregon-American logging camp in Vernonia. In the 1960’s, he married Agnes and settled into life on the family homestead. In the early 1970’s he also started mining in Deer Island, and spent more than four decades “making little rocks out of big rocks.” Known for his generous spirit, mechanical acumen, kindness toward all, and love of hard work and big equipment, John could always be found working at “the pit” and on the family farm, wearing his signature “uniform” of laced-up work boots, black Frisco jeans, a hickory work shirt, loggers’ suspenders, and a black skull cap. While he battled cancer, he continued to work until he could no longer walk and, after that, directed operations from his living room. John was preceded in death by his parents, three siblings, and mother-in-law Agnes Thompson, who served as his steadfast lunch cook and bookkeeper. He is survived by his wife, Agnes Marie Petersen, his four children and their spouses, John, Al (Kannikar), Mary Anne (Ed), and Jim (Cecilia), grandchildren, Heather (Jerry), Janie, George, Joey, Andy, and Agatha, great-grandchild, Taj, and nephew, Robert Petersen, who worked side-by-side with John for many years. On Friday, June 8, 2018, at 10:30 a.m., Fr. Frank Knusel will preside over a rosary service, followed by a funeral mass at 11:00 a.m. at St. Frederic Catholic Church in St Helens. A reception will follow at 1:00 p.m. at the St. Helens Elks Lodge. In lieu of flowers and donations, John’s family asks that you do what John did…….. enjoy nature’s wildflowers and spend your time and resources on your family.

John Allan Petersen, 83, died at his home on May 29, 2018. A lifelong resident of Columbia County, John grew up in Shiloh Basin, later moving to Deer Island. By age 15, John was working as a choker setter at the Oregon-American logging camp... View Obituary & Service Information

The family of John Allan Petersen created this Life Tributes page to make it easy to share your memories.